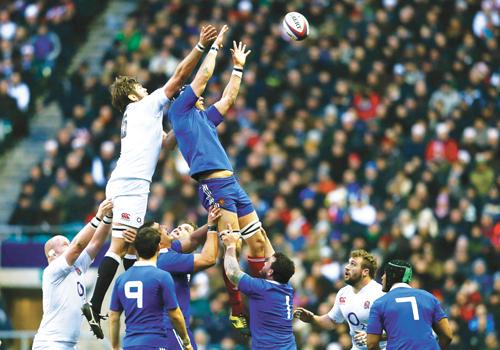 PHUKET: Before the Six Nations began the pundits were, as usual, making their predictions about the destiny of the championship. After their stunning autumn victory over Australia, France was strongly fancied to win “Le Grand Slam”.

Wales, despite being current Six Nations champions, had lost seven games on the bounce and seemed to be out of contention. Ireland, so strong at regional level, was beginning to show the team’s ages, and, despite the perennial genius of Brian O’Driscoll, was conceivably past its best. England, the youngest team, and fresh from an emphatic autumn victory over the All Blacks, was the dark horse.

As usual, events have proven the pundits wrong. England, with three wins from three games, stands at the top of the table. Not achieved without some alarums and excursions.

The win against Scotland (38-18) at Twickenham was conclusive, despite the home team conceding two breakaway tries, and the triumph against Ireland (12-6), ground out in the Dublin drizzle, showed self-belief, resolve and an ability to adapt to very different conditions.

Against a revitalized France, England lost the first half to a team whose scrummaging, lineout work and general tactical “nous” were superior. Wesley Fofana’s side-stepping, blind-side try was sublime. But in the second half, and partly as a consequence of some strange substitutions by Philippe Saint-André, England’s youthful and ultimately fitter team came back from the dead, inspired by outstanding individual performances by Manu Tuilagi and “Captain Courageous” Chris Robshaw. Stuart Lancaster, surely the coach of the year so far, talked proudly of “composure”.

Second and third in the table, both with four points each and separated by just 11 points, are two unlikely candidates for the title, Wales and Scotland.

Few gave Scotland a chance this year, especially after their early defeat by England (38-18), but they have shown resilience in overcoming first Italy (34-10) and then Ireland (12-8) at Murrayfield.

The victory over the Irish must rank as one of the great escapes of the tournament, especially after Scotland was totally outplayed during the first period, shackled in its own territory, and gained hardly any possession. Had Ireland taken its chances, it would have been out of sight by half time.

But Scotland battled tenaciously in the second period and, urged on by a near flawless performance from scrum-half Chris Laidlaw, absorbed a late Irish surge to grind out an unlikely win.

Though few Welshmen would agree, their win against France in Paris (16-6) ranks as the upset of the campaign. Plagued by injuries, a lapse in form and the loss of their coach, Warren Gatland, to British and Irish Lions duties, a depleted side held on to beat France.

More recently, and in the rain at Stadio Olimpico, Wales showed superior fitness and fire-power to subdue an Italian side (26-9) that lacked its best player and captain, Sergio Parisse. Wales has a powerful pack, and their juggernaut back line with youthful wings Alex Cuthbert and George North, is beginning to fire on all cylinders. At full-back, Leigh Halfpenny has hardly missed a kick or a tackle all campaign. A certain Lion in waiting.

Meanwhile, “Les Bleus” have lost all three games, a situation unthinkable at the start of the championship. After all, France has a greater pool of talent to choose from than any other Northern Hemisphere nation. However, and despite a rock-like scrum and consistently heroic performances from Louis Picamoles, the team has failed to gel. More changes in personnel can be expected.

Thoughts are now turning to the crucial March clash between Wales and England, which may well decide the winner of the Six Nations – unless either team slips on the banana skin laid down by Scotland or Italy. The presence of seventy-four thousand spectators in the Millenium Stadium, mostly Welshmen baying for English blood, will present England’s emerging young team with its greatest challenge yet.