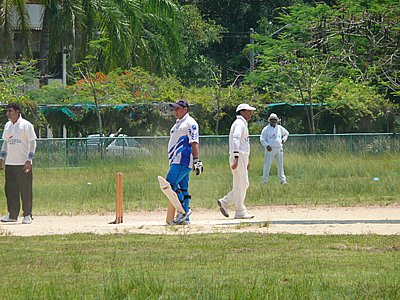 PHUKET: The 2011/2012 Island Furniture Cricket League is edging ever closer and the final pre-season friendly was played out at Cherng Talay School between arch rivals Patong CC and Laguna CC – 35 over champions and T20 title holders, respectively.

Lijo Hose and Val Guiraud opened the batting for Laguna and looked in control until Guiraud was caught on 18. Sami Ullah supported well with 19 and Lijo went on to make an unbeaten 33.

Patong’s bowling attack was lively, with Rishor’s fast medium action providing three wickets. Mike Feroz also took a couple of quick wickets when he was introduced to the attack. Laguna were eventually bowled out after 19.5 overs for 138 runs.

Patong’s innings was opened by Dean Noble and Vicky, but the pair did not last long against Laguna’s strike attack from Sami Ullah and Val Guiraud.

A steady partnership between Dave Thomas (28) and Anthony Van Blerk kept the scoreboard ticking over until Thomas was caught at backward point by Stuart Reading.

Laguna managed to pick up the wickets of Rishor and Richie Desmond, which gave them hope of bowling Patong out, but their efforts were too late.

Richard Folds (21 not out), and Van Blerk (45 not out) held their nerve with Van Blerk dispatching the winning runs to see Patong score 142 for 6 after 19.1 overs.

The Singapore Cricket Club will visit Phuket to play at the new Alan Cooke Ground in Baan Lipon on November 5 in 35 over format and on November 6 in T20 format.

No gain without the pain – Phuket’s own ironman explains