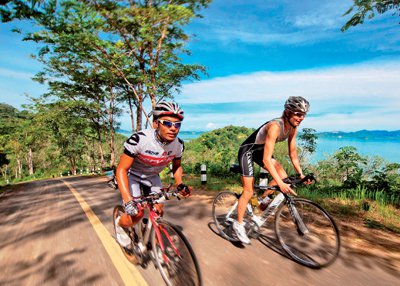 Ray’s latest journey on the big island at the biggest triathlon event in the world has given the smiling 31-year-old a lot to think about and a fresh ambition to go faster and inspire more of his countrymen to take up a sport that has offered him so many opportunities.

These opportunities would not have come without the support of his sponsors and Ray is quick to acknowledge the key role they have played in getting him to numerous start lines this year. Starting with Singapore 70.3, then the Philippines 70.3, Ray then went to the 70.3 Ironman World Championships in Las Vegas fully sponsored by his employer Laguna Phuket.

Following Ray’s double qualification in the Philippines for both Las Vegas and Kona (there were 30 slots available for the World Championships), his next stop (Kona) is the holy grail of triathlon that so many triathletes only ever dream about.

Once again the journey to the start line did not come without a financial headache and once again the support of Laguna Phuket and the Thanyapura Sports and Leisure Club (TSLC) came to his aid along with kind donations from friends, colleagues and fellow athletes.

Less than five weeks after competing in Las Vegas, Ray was off to the other side of the world to represent his country and participate in his first-ever Ironman. A 3.8km swim, followed by a 180km bike and 42km run, Ray had only been training for half of the distance.

In four short weeks, his coach, multiple Ironman champion and triathlon coach at TSLC, Jurgen Zack, worked hard to prepare Ray for the physical distance and mental journey he would encounter on October 8. Now that his Thai charge has a taste for the Ironman distance he wants to go back and this time go faster!

“I am very pleased with Ray’s performance. He is just starting to train properly and training was focused primarily on the 70.3. After getting the surprise slot in Kona, we had no time for specific Ironman training. So we decided to race Kona conservatively. It was just important to be steady and make it to the finish line.”

Eleven hours was the prediction and Ray came home bang on the mark in 11:04. “He will improve, I guarantee it,” says Juergen.

“All of Jaray’s friends and supporters in Phuket and colleagues at Laguna Phuket are extremely proud. Laguna Phuket is delighted to support Jaray. He is an exceptional ambassador for the sport, and we hope that his drive motivates more Thai triathletes to strive for higher goals,” said Debbie Dionysius, Assistant Vice President – Destination Marketing for Laguna Hotels and Resorts.

“I was excited, a little nervous. Treading water for 20 minutes before the start was new to me. We were aiming for a 1:20 so when I came out of the water in 1:14 I was so happy.”

“I had an average of 35-37kph and felt really good on the way out; then, at the U-turn at Hawi, my speed kept dropping and dropping. The wind was so tough.”

“The first 20km of my run was very good. I was running at five-minute kilometers. But the last 10km was tough. I walked through every aid station. Everything was tired; my body was in pain. But then I would see Roman Floesser (Race Director of LPT and the Ironman 70.3 Asia-Pacific Championship) and he was on a bike following me and supporting me. This helped me a lot.”

On crossing the finish line, Ray was at a loss for words for the sense of pride he felt, carrying his National flag over the line.

“This was better than my expectations. I am so proud of what I did and happy. Now I want to do more and inspire more Thais to participate in triathlon,” he says.

That inspiration is already working as Ray is now helping a group of young athletes in his village in Phuket to get into the sport.

“There are six or seven people in my village who did the LPT last year, but this year I will tell them to do both the Laguna Phuket Triathlon and the 70.3. I will tell them to focus on taking part. It does not matter where they come; it just matters that they complete and then can understand the sense of achievement,” he says.

Watch out for him at the season ending Tri-Fest starting in November. Ray will then race again the following weekend at the Ironman 70.3 Asia-Pacific Championship where there are 30 slots for Kona.

Patong Cricket make it 3 from 3