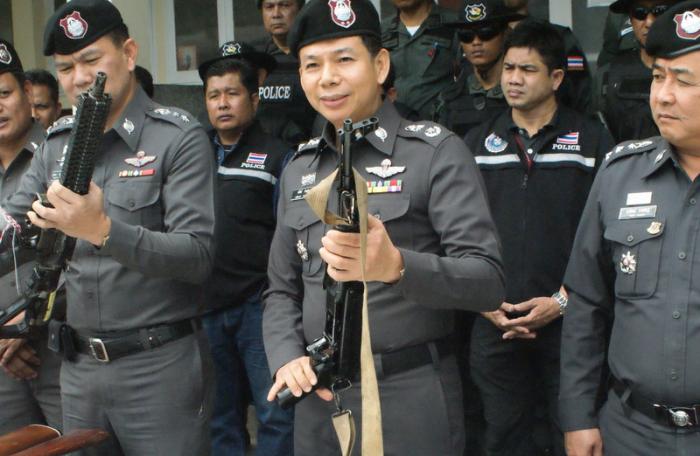 “The leader of the network, Kittisak Nanon, 25, and two of his associates, Suphap Reaproi, 28, and Kittiphan Sukdam, 25, were arrested with about 40,000 ya bah (methamphetamine) pills, a shotgun, revolver and handgun, and several rounds of ammunition,” said Krabi Provincial Police Commander Maj Gen Worawit Panprung.

“Another known member of the network, Somnuek Thongnuan, 31, managed to escape. We have issued an arrest warrant for him and hope to apprehend him soon,” he added.

Mr Kittiphan was arrested on Tuesday, in a house in Khao Phanom sub-district, with three pills of ya bah and a shotgun. After questioning him, police moved to arrest Mr Suphap, who was carrying 395 ya bah pills.

“The first two suspects then led us to Mr Kittisak, who was arrested in Wang Phra Pang Sub-district in Trang. At his house, we found 19 packs of ya bah pills, 38,000 in total, as well as a handgun,” said Gen Worawit.

Additionally, a drug dealer named Pongthep Sarangsao, 29, was arrested in Thungsaithong sub-district in Krabi with a liter of methamphetamine and cola mixture.

“We searched his house to find a record book with a list of customers, a .32mm gun, 32 bullets, a home made shotgun, an AK47 and 20 bullets. He was charged with possession of a category 1 drug and illegal possession of firearms,” said Gen Worawit.

Plai Phraya Police also arrested a drug suspect who had been on the run and seized an M16 with ammunition.