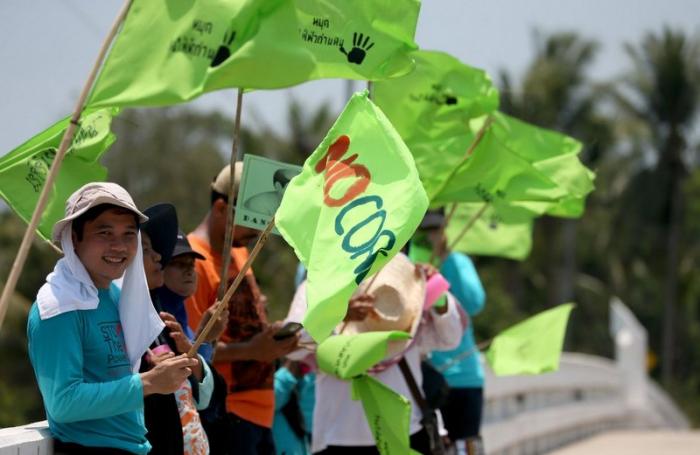 The decision was made by the committee during a meeting at Government House this morning, amid an uproar about the value of the plant and Thailand’s future energy policy.

Gen Prayuth said the project had been delayed for more than two years. He added that the project would benefit the people and the project safety has been guaranteed.

Large crowds of protesters gathered outside Government House in Krabi awaiting the decision on the plant.

Government spokesman Lt Gen Sansern Kaewkamnerd called for a constructive protest from those who opposed the plant.

“They should suggest a long term solution for the country and people in southern provinces. So far, we haven’t seen any proposal [from the opposition],” he said.

Gen Sansern insisted that the project will benefit people in terms of energy security and is the most suitable investment when compared to other kinds of energy.

The plant has drawn much resistance from locals and environmental activists over the years.

In December last year, representatives from 11 private and government sector organizations met to reiterate their stance against the construction of the plant, saying it would adversely impact the quality of life for locals and cause billions of baht in tourism losses.

“This is totally against the government’s own initiative of ‘Krabi Go Clean’. We don’t mind a power plant, just not a coal plant that will ruin the environment and drive tourists away,” said Amarit Siripornjuthakun, head of the Krabi Tourism Council of Thailand.

The location of the plant is reportedly part of the wetlands protected under the Ramsar Convention, an international treaty for the conservation and sustainable utilization of wetlands, and was marked out as a protected zone in 2001.

“It will affect tourism for sure. Tourists come to Krabi to breathe fresh air and see unspoiled natural beauty – not to breathe in black smoke and ruin their health. EGAT said they will help those who live within a five-kilometer radius, but what about the rest of us?” Mr Amarit said.