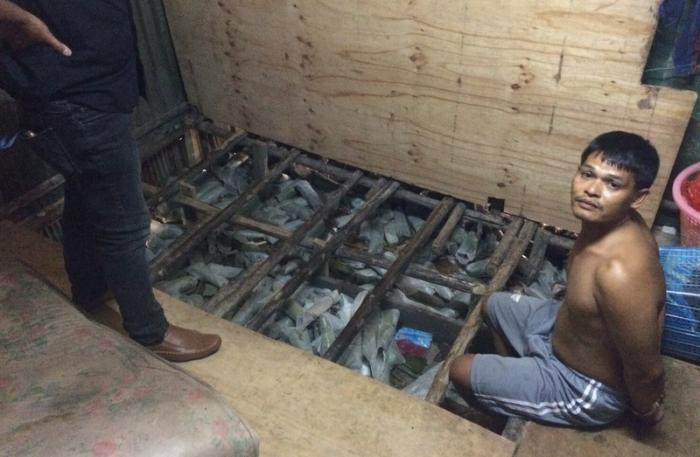 PHUKET: A Myanmar man was arrested with nearly 100 kilograms of krathom hidden in a secret underground room at his house yesterday evening.

The suspect, named Too Naing, 37, was living at a Burmese camp in Moo 1, Kamala.

Police seized 75kg of krathom, 10 packs of fresh krathom leaves and some unprocessed stale leaves, nine bottles of cough syrup, weighing scales, 3,800 baht cash, a record book with a list of customers and other drug paraphernalia.

“Our sources informed us about him, so we observed his activities for a while and learned that he is selling drugs to both Thai teenagers and Burmese workers in Kamala,” said Kamala Police Deputy Superintendent Sophon Borirak.

“We then sent one of our team members to go undercover and get close to him. Our agent learned where he hid his drugs,” said Lt Col Sophon.

Police then raided his house and caught him in the act of categorizing the drugs. They then discovered a storage area under the floor boards, where he hid his stash.

“Mr Too Naing confessed that all the krathom belonged to him. He confessed to buying 100kg of krathom on Tuesday, from a Thai man whose name he claimed not to know. He then hid the drugs in storage and gradually sold them to his customers,” said Lt Col Sophon.

“For his own safety, he did not deliver the drugs, but asked customers to pick them up from his house.”

The market price for a pack of krathom (about 20 leaves) is 100 baht per pack, while a kilo sells for about 1,300 baht and cough syrup mixture for 90 baht.

Mr Too Naing was charged with possession of a category 5 drug with intent to sell and was taken to Kamala Police Station for further legal processing.