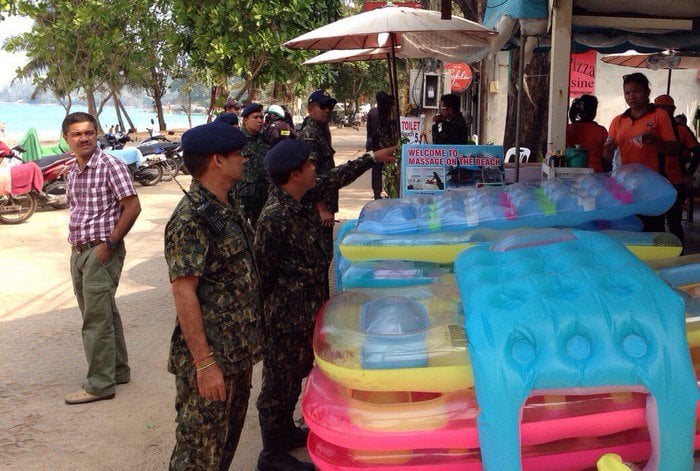 PHUKET: Several iconic beach clubs are among 39 businesses along the Surin beachfront boardwalk that were given eviction notices yesterday.

The notices, and the negation of contracts for the use of the buildings, follows the demolishing last year of some of the businesses’ developments on the west side of the boardwalk, which were deemed to be encroaching on public land (story here).

“These were never supposed to be rented out to a third party. At this point, we just want the businesses gone,” Ma-ann Samran, president of the Cherng Talay Tambon Administration Organization (OrBorTor), told the Phuket Gazette today.

The eviction notices, signed off by Mr Ma-ann, were distributed by Thalang District and Cherng Talay OrBorTor officers to Catch Beach Club and Bimi Beach Club, as well as other business on the boardwalk.

“All of the buildings either belong to the Phuket Provincial Administration Organization and the Cherng Talay OrBorTor, so we do not want the business operators to demolish the buildings, we just need them to leave,” said Thalang District Chief Veera Kerdsirimongkol. “If the buildings have to be demolished, we’ll take care of it.”

Business operators have 15 days to appeal the eviction order.

Last year, one investor who poured about 35 million baht into one of the beach clubs explained to the Gazette in an exclusive interview that he was under the impression that he had followed all legal channels when leasing and developing the property.

“I talked to local officials and had the necessary permission to build and operate the beach club – and now I am told to pull everything down. Nobody is taking any responsibility,” the frustrated investor, who spoke on the condition of anonymity, said last year (story here).

Officials were unclear about what the fate of the buildings would be once the current businesses are gone.