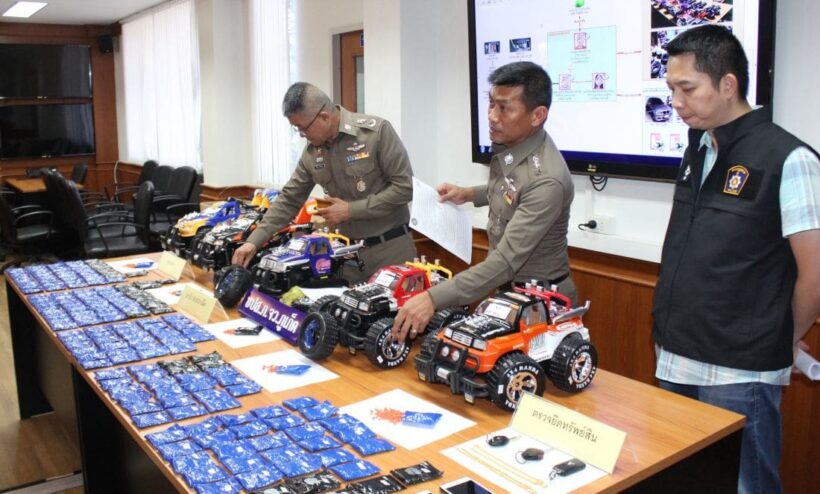 Phuket police have seized 40,000 methamphetamine pills, crystal methamphetamine and heroin from  model cars sent via parcels in the post.
The three suspects arrested are 29 year old Thai national John Marako Viccos, 29 year old Tipparat Prompramoon and 44 year old Udom Rattanamanee. Police seized 39,820 methamphetamine pills, 18.80 grams of crystal methamphetamine and 0.18 grams of heroin. Police seized other items valued at 1,230,000 baht.
The Trio taken to the Phuket City Police Station where they have been charged with illegal possession of Category 1 drugs with intent to sell.
Maj Gen Teeraphol Thipjaroen says, “The major arrest follows a September 24 arrest where 33 year old Pongsak Srisooksai was caught with 119 methamphetamine pills. Police also arrested 41 year old Sontaya Noodam. Police seized 2.52 grams of crystal methamphetamine 67 of methamphetamine pills from him.”
“Sontaya told police that he bought drugs from John Marako Viccos who lived at a house in Koh Kaew On September 26 police went to John’s house where police found even more drugs.”
“John told police that he has been released from the Phuket Provincial Prison two years ago. In June this year he met again with Udom who he had known since they were in prison together.”
“Udom was ordering drugs from Bangkok, which were hidden in model cars, and deliver via parcel boxes. After they were unpacked, John delivered drugs to the customers.