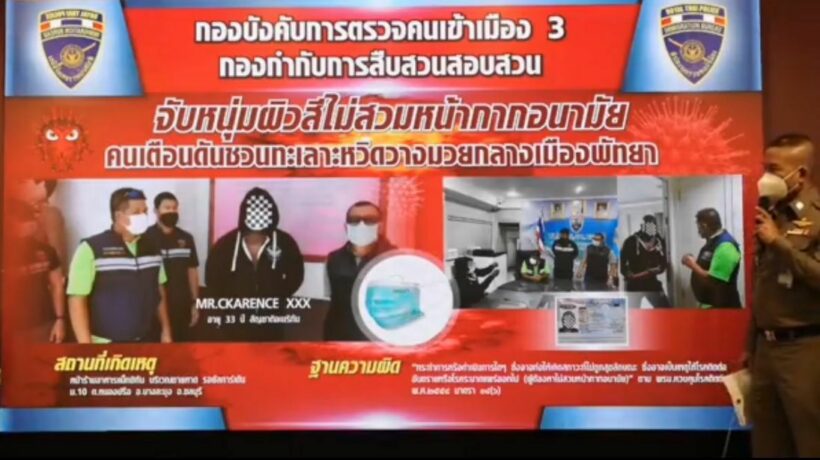 A 33 year old American man was recently charged for not wearing a face mask at a Taco Bell in Pattaya. Earlier this month, the expat and another foreign resident got into a heated argument at the soft opening of Taco Bell over whether to wear face masks while in line to order at the fast-food restaurant.

After being confronted about not wearing a mask, the American shot back at an older expat, telling him to go “f*** a prostitute” and threatening to beat him up. Videos of the incident were widely shared on social media. Thailand’s Immigration Bureau decided to step in and take action.

Under emergency measures in place to combat the Covid-19 pandemic, face masks, either cloth or surgical, are required in public places in all of Thailand’s 77 provinces. According to an official revision of the rule published in the Royal Gazette last month, detailing the range of fines, the first offence for not wearing a mask carries a 1,000 baht fine. The second offence fine ranges from 1,000 baht to up to 10,000 baht, depending on the situation. The third is up to 20,000 baht.

Prior to the revision, the rule was an up to 20,000 baht fine for not wearing a mask. In April, PM Prayut Chan-o-cha was fined 6,000 baht for not wearing a mask at a Cabinet meeting. A photo of the prime minister at the meeting was shared on social media, drew criticism from the public and the police later formally charged Prayut for violating the mask mandate.

Reports don’t mention how much the American in Pattaya was fined. In a live press briefing streamed on Facebook, the Immigration Bureau said officers from the bureau as well as from the Chon Buri provincial police went to the man’s condo where the expat allegedly admitted that he was the same person in the video, the Thai media outlet Naew Na reported.

Reports say officers detained the man and took him to the local police station where he was formally charged with “unhygienic activity potentially spreading a dangerous infection” for not wearing a mask. The charge is listed under Section 34 of Thailand’s Communicable Disease Control Act.

Back in April, during the start of the recent wave of infections with new disease control measures being imposed to curb the spread, Phuket’s vice governor singled out people he called “problem foreigners” who don’t wear face masks in public. The Phuket government even made a 2-step plan to deal with expats who refuse to wear a mask. First, local officials met to make sure regulations are clear and to launch a public campaign to raise awareness. Step 2 in their plan was to prosecute anyone who broke the mandate.

Early on in the coronavirus pandemic, in February of 2020, when the country was still open to international tourism, Public Health Minister Anutin Charnvirakul criticised foreign tourists who do not wear face masks, or refuse to wear them when offered for free by the government, saying those foreigners “should be kicked out.”

The minister later apologised for the comments, while still reiterating that foreigners should wear face masks. But about a month later, the minister made more xenophobic comments about foreigners not wearing face masks, adding that “many farang dress dirty and don’t shower.”

This took place on Tuesday afternoon at Taco Bell in # Pattaya

vlad
To the Anti Maskers or people don't agree with mask wearing ask yourself this Question. How would you feel if you or your partner was stood in a cue at Mcs or Kfc where everyone was wearing a mask, how…

dimitri
15 minutes ago, longwood50 said: Personally, I don't think that the Covid measures do much if anything to stem the spread of Covid. If they did, then the infections here in Thailand would be going down as the restrictions are…
Objectivance
Wanker vs wanker. They both made relevant points in their arguments, though, I'll give em both that much. ?