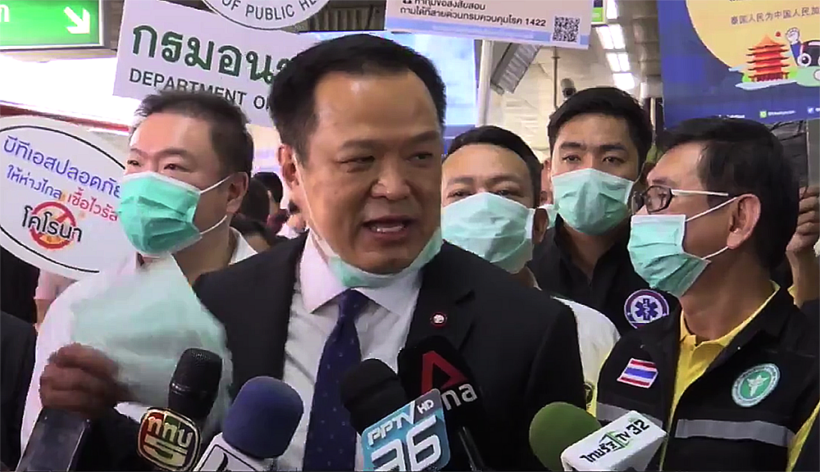 Thailand’s mercurial Public Health Minister Anutin Charnvirakul has slammed foreign tourists who aren’t wearing face masks, or refuse to wear them when offered a free one offered by the government, says they “should be kicked out.” He was handing out government freebies this morning at the Siam BTS station as part of the Thai government’s education about coronavirus.

At a door-stop interview with the Bangkok media this morning, the minister also insisted “non-compliant behaviours of foreigners should be reported to embassies”.

Anutin’s use of the term ‘farang’ is often associated in a derogatory sense when referring to foreigners. The term can also refers simply to caucasian foreigners but the Minister’s scorn for “farang’ was evident this morning as waved some of the free face-masks around whilst making his point.

The Government PR stunt at the Siam BTS, one of the busiest public transport terminals where two BTS lines meet together, was hosted by Minister Anutin who spent his time handing out free surgical masks to travellers using the ‘Skytrain’. He said that the masks will help people to protect themselves against the coronavirus.

Some foreign tourists didn’t take them, which led to the Minister’s outburst by him suggesting they “should be kicked out.”

“They don’t care about the big picture and these tourists are in the country. We’re giving the masks to them and they still refuse.”

Wearing medical masks when not indicated may cause unnecessary cost, procurement burden and create a false sense of security that can lead to neglecting other essential measures such as hand hygiene practices. Furthermore, using a mask incorrectly may hamper its effectiveness to reduce the risk of transmission – World Health Organisation

Thai Public Health Min Anutin Charnvirakul was handing out surgical masks today for people to protect themselves against the Novel #Coronavirus. Apparently some foreign tourists didn't take them, which led to this unusual outburst by him suggesting they "should be kicked out." pic.twitter.com/UcVJtYCqeM