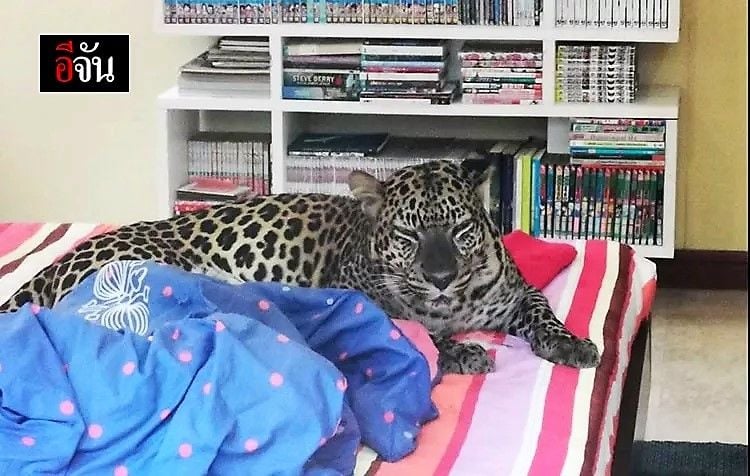 A couple in Chonburi, eastern Thailand, have not ingratiated themselves with neighbours after it was revealed they’re keeping a pet leopard in their home.

It’s understood that a Thai woman known as Nittiya, and her foreign husband, nationality unconfirmed, have just recently moved to the area from Chiang Mai, and news of their unusual pet has put neighbours very much on edge.

The couple have just had a visit from the Thailand Wildlife Enforcement Network (Thailand-WEN) after anxious villagers notified officials, saying they believed the leopard had been acquired illegally.

They added that the leopard was living in the couple’s home and being treated as a pet, expressing concern that it could escape and attack people.

Yesterday, officials visited the home, which is surrounded by a 3-metre-high wall. Nittaya explained that the couple have had the leopard – named Typhoon – since it was born 4 years ago, producing the required documentation for inspection.

Officials agreed that the couple have the right to keep the leopard, but will need to apply for a new licence to keep it in its new location.