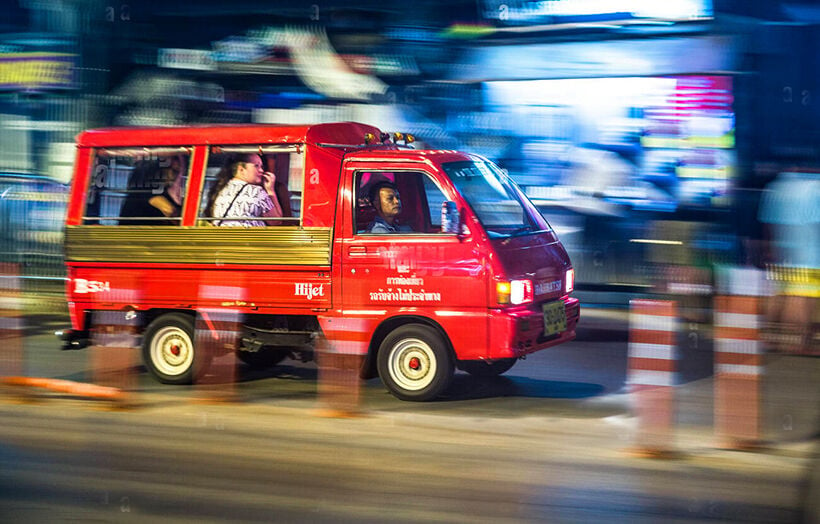 ‘Dog bites man’ would rarely be a headline. ‘Man bites dog’ however IS a headline. In the same way ‘a taxi driver provided customer with a good experience’ isn’t a headline. That’s unless it’s in Phuket Thailand.

The Thaiger could pave the road, all the way from Bangkok to Phuket, with stories of the southern island’s faltering attempts at public transport. For one of the world’s favourite tropical island destinations, it has the crappiest, and most expensive options for public transport, compared to, well… even Bangkok.

Phuket has a few 40 year old songtaew open trucks, even fewer buses that don’t seem to run to any schedule and nothing in the way of trains, or BTS style services. If you’re really lucky you might find a motorcycle taxi but they’re rare. Like really rare.

All the talk about the white elephant project of the decade, the so-called Phuket light rail service, that was planned to run from the airport, then through Phuket Town and into the southern expat favourite of Chalong, has ended up in the ‘seemed like a good idea at the time’ file.

But the plan to provide a public light rail service that travelled to just about everywhere, EXCEPT where tourists would ever visit, was always doomed to failure. Of course it hit fierce resistance too, from none other than Phuket’s famous tuk tuk and taxi cartels… often described generally as the Phuket taxi mafia.

Simply, these gangs have worked together for over 3 decades to lock out any competition, or even opportunities for modernisation or providing better services for tourists, let alone locals. They’ve even been able to infect any possible competition from the new ride-hailing services by forcing the drivers to charge the same, extortionate fares.

How extortionate? Let’s start with a taxi ride around Bangkok, in the same small Toyota sedan taxis.

Firstly, the meters will work in Bangkok, in Phuket you’re more likely to find a policeman with a properly-fitting uniform that you are a taxi with an actual working meter. Despite the actual law saying they must use their meters, they don’t.

For the tuk tuks, those 3 cylinder Diahatsu open vans, often with amplifiers and speakers with more power than the actual engine, there is no meter anyway. There’s a just a fixed price and your best attempt at haggling.

Compare a 30 minute trip in a taxi from, say, Suvarnabhumi airport to downtown Bangkok – usually a trip of 30 minutes. You’ll pay around 200 baht for the ride… I do it at least once a week.

But a similar half hour ride from Phuket airport to, say, Kathu in the middle of the island, will cost you more like 600 – 800 baht. Even short five minute trips from one Patong area to another will likely cost you 150 – 200 baht. That trip in a Bangkok taxi would probably not even push the 35 baht flag fall.

The difference is so wide that it remains a seemingly unsolvable, festering wound for the recovery of the island’s tourist economy, and reputation.

To his credit, 54 year old Suchart Nitiwaranuluck provided a city tour of Phuket Town for a very reasonable 50 baht. When approached to comment on the post of a recent Thai tourist, he told the shocked media that he’d been providing the same excellent service for years, even long before Covid came to town. So plaudits and well-earned pats on the back to Suchart. We need more like you in Phuket.

Countless attempts have been made to reel in Phuket’s transport cartels – successive Phuket Governors, national governments, more than one national police chief, even the army had an attempt after the 2014 coup. Then there’s been a long parade of embassies and consular officials that have also weighed in, only to be run off the island with their tails between their legs.

Even 2 years of pandemic and restrictions has done nothing to dent the power of the local taxi cartels.

From the moment you walk out of the domestic or international terminals in Phuket, you’re faced with the machinery of a well-oiled, airport-endorsed, taxi fare rip off. It is the first impression and the last impression many tourists will have of their visit to the island.

As Phuket struggles to recover from 2 years of restrictions and attract tourists back to its beaches, the one, huge elephant in the room, that is holding back the island’s progress, is the transport cartels.

A vibrant future for the southern Thai island revolves around an efficient, sensible, affordable and equally vibrant public transport selection to move tourists and locals around.

So bring on more Sucharts and his 50 baht city tours. Let’s hope we hear more about Suchart and less about the price-gouging culture of Phuket’s taxi and tuk tuk gangs.

The Thaiger tried reaching out to the Phuket taxi cartels but couldn’t find their Facebook page.

ianjmofo
I recon Suchart is talking shite, no chance he’s been doing tours of town for 50 b all this time. This is the perfect time for Phuket to do away will all the greedy taxi and tuk tuk associations for…
Fanta
Coming up next - First time visitor to Thailand finds true love and explains why his girlfriend of 2 weeks, and 20 year veteran of the bar girl scene, is different.
kjun12
Congratulations to all of you for your recent comments concerning Phuket and its taxi situation. I have been to Phuket on two occasions and have no plans to return since I consider the entire island to be a major… FarangryBirds
4 hours ago, ianjmofo said: . Shame the government don’t give a shit about the citizens or tourists and it’ll never happen. They prefer to appease a group of morons in tuk tuks that kick them back a few baht…sad…

Poolie
It's a taxi, for Gods sake. No-one forces you into one. Hire a car/bike. Take a bus. God forbid, even walk! What a song and dance about nothing. 😀