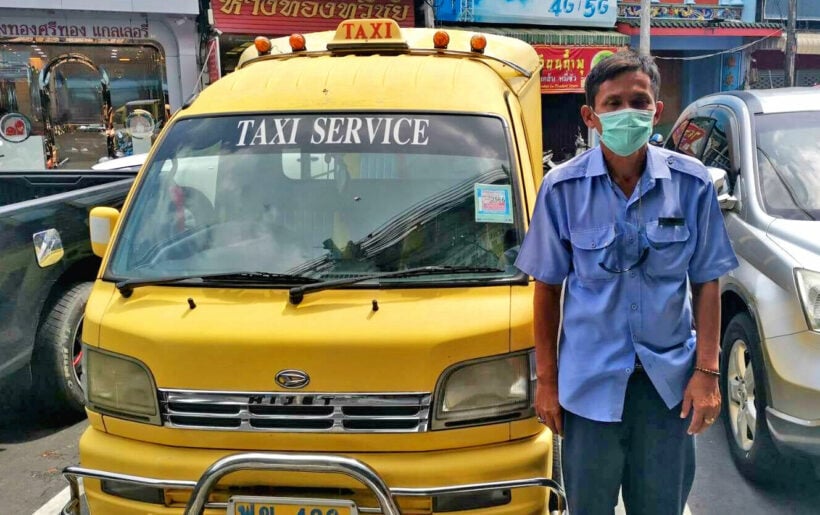 A Thai tourist has praised a taxi driver in Phuket for the “perfect city tour at a reasonable price of only 50 baht for a round trip”. The glowing praise might confirm that Phuket still welcomes domestic tourists with affordable services. Or perhaps the tourist got lucky!

At the beginning of this year, one Phuket taxi driver became an unwilling viral star on social media after a Thai traveller posted on social media claiming that the driver ripped him off. The driver charged a fare of 600 baht for a trip from a restaurant in Kamala beach to a hotel near Patong Beach, a trip of around 20 minutes over some 12 kilometres. It was expected to be less than 170 baht according to the fare on another transport service application. Of course the Phuket Governor and local transport officials claimed the alleged rip off was an anomaly.. a misunderstanding and that they would “look into it”.

The incident follows decades of dramas, tales of rip offs, a ‘poor’ reputation has caused some Thai, and foreigners, to avoid visiting the province due to the “tourist price” and general price gouging by taxis and tuk tuks on the island.

On April 18, a Facebook account Phet Yotsawat shared his impression and pictures of a yellow Daihatsu ‘tuk tuk’ on a travel group.

“I met this uncle (older male) taxi driver while looking for delicious dishes in Phuket city. He invited me to take a city tour with him at 50 baht for a round trip. He insisted that he would take me around the city with the price. I was shocked because it was too cheap. The uncle asked me 100 baht as I had four more friends. I was scared and thought it was a scam. However, the uncle kept convincing me, and I finally accepted it.”

Phet Yotsawat continued by saying… “I went around the city. I visited popular spots, ate at a restaurant, and bought souvenirs with a transport budget of only 100 baht. It was very cheap!!! The taxi driver waited while we were travelling and eating. He was willing to service and didn’t complain. I decided to give him 300 baht. My trip started from 1 pm until 4 pm, and that’s worth the money.”

The writer included the taxi’s contact number and recommended others to try the service.

Phuket’s Provincial Public Relations also published this story on their official page. The taxi driver is reported to be a 54 year old Suchart Nitiwaranuluck. He says he offered the service at this price even before the pandemic. He didn’t want to overcharge the tourists and revealed that sometimes the restaurants and souvenir shops offered him money for bringing customers.

He invited tourists to visit Phuket and urged other taxi drivers to avoid ripping off tourists, which spoiled Phuket’s reputation.

Sir, we salute you! Keep doing a great job and setting a higher standard for Phuket’s tuk tuk and taxi drivers.

Guest1
He didn’t want to overcharge the tourists and revealed that sometimes the restaurants and souvenir shops offered him money for bringing customers. Of course, that is not just a good heart driver. The "tourist" pays it in the shopping bills

Looking for a great spa in Koh Samui? Here is a list