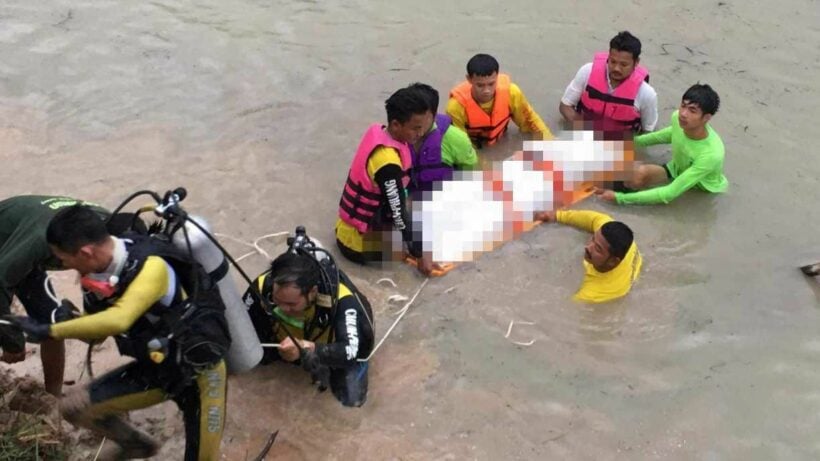 Police in the northeastern province of Nakhon Ratchasima report that a woman was found hanged in a workers’ shelter and her 12 year old son drowned in a nearby pond at a sand depot yesterday. Workers arriving in the morning discovered the woman, hanged with electric wires from the beam of the shelter in tambon Chum Phuang, according to the district police chief.

After police and rescue workers arrived, the body was taken to Chum Phuang Hospital for an autopsy. The dead woman’s parents went to the hospital to inspect the body, and confirmed it was their daughter, 33 year old Tukta Thongkasem.

They said Tukta’s son, Surasak Thongkasem, who normally stayed by his mother’s side, had also gone missing, prompting police and rescue workers to go to the sand depot for a search. They found a pair of yellow sandals near a pond about 2 metres deep. They scoured the pond and found the boy’s body, which was also sent to the hospital for autopsy.

Prasan, the dead woman’s father, said Tukta had married a Swedish man, and their son Surasak was a sixth-grader at a local school. The husband returned to Sweden 3 or 4 years ago and never returned. He occasionally contacted Tukta but never sent her any money, according to Prasan.

After her husband abandoned her and the boy, he said that Tukta had suffered from deep depression. Prasan said he and his wife went to work in nearby village about a month ago, leaving Tukta and her son at their home. They returned home yesterday to discover they were both dead.

It’s believed Tukta had committed suicide, but Surasak’s drowning is still a mystery. Police are investigating the causes of death of the mother and son.