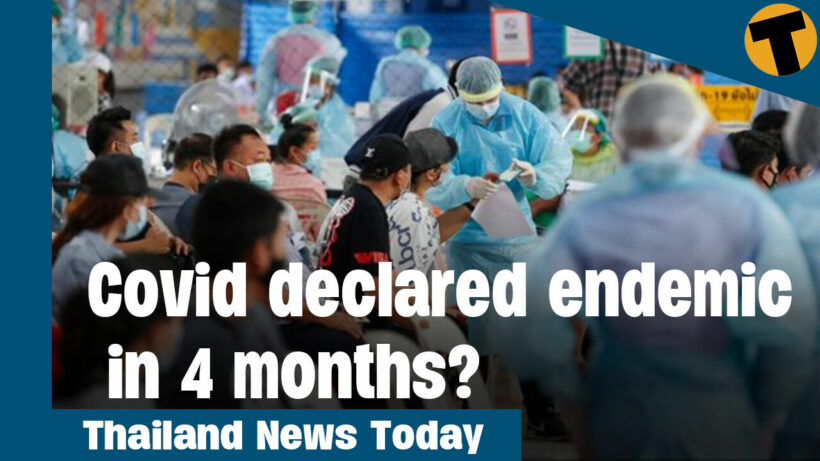 Thailand’s health ministry wants to declare Covid 19 as endemic in the next 4 months. Senior ministry official Kiattiphum Wongrajit says the Omicron variant has resulted in a much lower fatality rate than in previous waves, and while lung infections are increasing, cases of severe illness are still lower than earlier waves of the coronavirus.
Health officials say deaths are also 10 times lower and could be lowered further if up to 70% of the elderly population get their booster vaccine dose.
The health ministry says it plans to hold a press conference to confirm the plan for transitioning the country out of pandemic status and on to managing an endemic illness. At the start of this year, the ministry confirmed its intention to declare Covid-19 endemic this year.
Kiattiphum says that as part of the move, the duration of Covid treatment will be adjusted and the quarantine period for high-risk contacts will be reduced. At this stage, officials say a return to lockdowns is extremely unlikely, even with the current surge in cases.
Kiattiphum says asymptomatic patients or those with only mild symptoms should do home or community isolation and leave hospital beds for those who need them, including those seriously ill with illnesses other than Covid.

In light of side effects, the Ministry of Public Health has changed its previously liberal stance on Favipiravir, now giving it to patients only if necessary. Authorities now warn that the drug should NOT be taken together with herb green chiretta, the popular Thai herb with antiviral properties commonly as Fah Talaijone, which during the height of the pandemic, flew off the shelves and was basically being taken any….person in Thailand who could get their hands on them. Great job warning us about that!
Moreover, authorities report that side effects of Favipiravir include…get this….hepatitis!
And… Changing your eye colour to blue!
I didn’t know this drug contained spice from Arakkis!
Therefore, the Public Health Ministry Secretary Kiattiphum Wongrajit, said Favipiravir will be provided according to a doctor’s consideration. He said there was a misunderstanding that every Covdi patient had to take Favipiravir because the state provided it a lot before.
Kiattiphum said the patients should understand that medicine is not a snack, because of side effects. Yeah, we know that! But did you?
So only patients with moderate symptoms and above would receive the medicine, and some may receive chiretta tablets or Fah Talai Jone in Thai, which they cannot take together with Favipiravir.
The Secretary said most patients infected with Omicron can recover on their own. The Deputy Director-General of the Department of Medical Services, Natthaphong, also added that the Covid symptoms now are similar to a normal fever different from the Delta variant.
Nattapong said home isolation is the primary treatment for now and shared that doctors would take around 2-3 days to consider the level of the patient’s symptoms. If they have a high fever for 24 hours, rapid breathing, and low blood oxygen, patients can contact an emergency hotline at 1669 to get treatment in a hospital.

Even though Songkran is still 7 weeks away, the government is taking the front foot on whether to allow for any holiday celebrations.

The CCSA will meet next week to discuss potential disease prevention measures for the big Songkran holiday. However, it says it will not impose travel restrictions to prevent Thais from heading home for the annual commemoration.
Supot, who chairs the CCSA operations centre, says the current surge in infections is expected to plateau and then drop during March. Therefore, by the time the Thai New Year holiday comes around in April, people should be able to celebrate in a manner that’s as close to normal as possible.
Close, but not completely back to normal – so put your super soaker away for another year. Supot says large gatherings and parties during Songkran will still be prohibited, but there will be no ban on inter-provincial travel.
Thailand hasn’t had a completely “normal” Songkran, complete with wild water-fights, since 2019. Instead, celebrations have been muted, and many would say, more traditional, involving blessings and making merit at temples.

41 coronavirus-related deaths were reported by the CCSA today, raising the pandemic’s death toll in Thailand to 22,809
with 1,111 of those fatalities occurring since the start of this year.

There are now just over 190,000 people in Thailand being treated for Covid-19.

Out of the new cases recorded today, 201 were found in correctional facilities. More than 80,000 inmates at Thailand’s overcrowded prisons and detention centres have tested positive for Covid over the past several months.
Since the start of the pandemic last year, the CCSA has recorded just over 2.8 million confirmed Covid-19 cases. Out of that number, around 595,000 Infections have been reported since January 1.

Pro-democracy protest leader, Parit Chiwarak, also known by his nickname Penguin, has been freed on 3 months’ bail after proving to the Court that he needs to sit final university exams.

The court had previously refused to grant bail until the Faculty of Political Science at Thammasat University issued Parit with a certificate to prove his status. Bail was set at 200,000 baht and the activist has been released until May 24.
While on temporary release, Parit is bound by a number of conditions or he will have his bail withdrawn. He is not permitted to get involved in any activities considered offensive or damaging to the monarchy or the court.
He is prohibited from obstructing court proceedings and banned from inciting unrest on social media or participating in any rallies that could incite unrest.
The Ratsadon protest leader is also banned from leaving his home between the hours of 6pm and 6am, unless to seek medical treatment or with permission from the court. He must wear an electronic ankle device and is prohibited from leaving Thailand unless given approval by the court. Once the 3-month bail period is up, he must report back to the court.
At a hearing on Wednesday, the Bangkok South Criminal Court rejected a bail application from fellow protest leader and human rights lawyer, Anon Nampa, on the grounds that there are several cases pending against him and claiming he is likely to offend again. The reason for his bail application – that he needs to earn a living to support his family – was dismissed as insufficient.

DoUKnowWhoIAm
Let's take the decision today, from 25 June we have an endemic.
MrNovax
Reading through this article i almost spit out my coffee. Its almost as if they are actually following the data rather than drumming up fear. Personally id like to see these measures done immediately but its great to hear that…
think-and-ask
*Post removed* Moderator