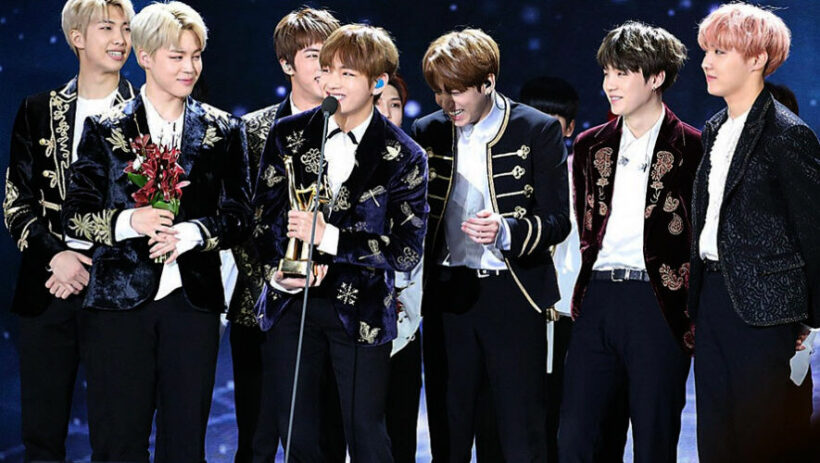 Superstar K-pop band BTS have won the The International Federation of the Phonographic Industry’s 2021 Global Recording Artist of the Year award, again. It’s the second year in a row for the seven-member group.

BTS again received the award based on their worldwide performance across digital and physical music formats over the past 12 months. Around the world, BTS were the best-performing act globally throughout 2021, followed by solo artists Taylor Swift and Adele.

IFPI chief executive Frances Moore noted that the band had pushed through a real or perceived language barrier to win the award for their work in both Korean and English languages (and Japanese).

“By performing in three different languages, they demonstrate their extraordinarily unique global appeal, and their dynamic and passionate fan base has helped to make them the first artists in history to top the Global Artist Chart in 2 consecutive years.”

“BTS’ phenomenal success over the last year is a testament to their creativity, hard work and ongoing commitment to continuing to find ways to bring their music to the world.”

BTS notably released their Grammy-nominated single ‘Butter’ and the ‘Permission to Dance’ B-side single last year, as well as a high-profile collaboration with Coldplay, ‘My Universe’. They also won the American Music Awards’ Artist of the Year award in 2021, the first Asian band to win the coveted honour.

“We would like to wish RM, Jin, SUGA, j-hope, Jimin, V and Jung Kook and all who work on their team huge congratulations on winning the Global Recording Artist of the Year Award and on another year of brilliant success.”

Each of BTS’ 2021 releases topped charts around the world and broke numerous records.

“The IFPI Global Recording Artist of the Year Award and top 10 chart is the only ranking to accurately measure consumption across all formats (including streaming formats, digital and physical album, and singles sales) and all countries. It is weighted based on the relative value of each method of consumption.”

The IFPI started presenting the Global Recording Artist of the Year Award back in 2013.

Since then, One Direction, Adele, and Ed Sheeran have each been recognised, while BTS join Drake and Taylor Swift as the only artists to win the best-performing global artist award over two years.

BTS were in good company. Other artists listed in the category for 2021 included Taylor Swift, Adele, Drake, Ed Sheeran, The Weeknd (not a spelling mistake), Billie Eilish, Justin Bieber, Seventeen and Olivia Rodrigo.

Seventeen, also under the umbrella of BTS’ management company Hybe Corporation, are the only other group from South Korea in the top 10, everyone else being US or UK acts.

BTS have now racked up enough awards and both physical and digital single and album sales to make them one of the most influential bands of the last 50 years.

Lyp14 [ctxa]
For some weird reason I read that title as: “International Federation of the Pornographic Industry” 🤣🤣 Didn’t know the Bangkok BTS were making songs. I certainly have seen some ads but didn’t think it was that serious.

Dedinbed
39 minutes ago, Lyp14 [ctxa] said: For some weird reason I read that title as: “International Federation of the Pornographic Industry” 🤣🤣 Didn’t know the Bangkok BTS were making songs. I certainly have seen some ads but didn’t think it was…
think-and-ask
are those, men or women ? not easy to say, this days. trans-gender-"ism", reminds on, wars, virses and climate. well, T.ell e V.ision is waht it is.