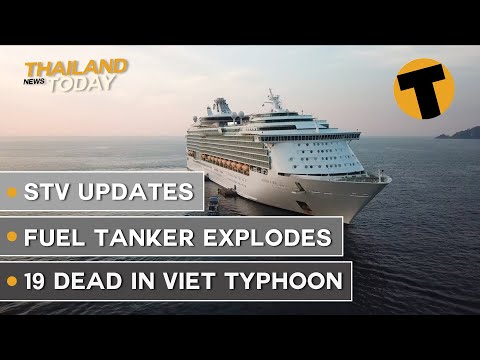 Daily TV news, in English. Everything you need to know in around 5 minutes. Keep up to date on The Thaiger.

Firstly the Phuket Model, now the Pattaya Model as the eastern seaboard city wants to cash in on the new Special Tourist Visa scheme to help boost the local economy.

Potential travellers would be from cities in Russia and China that are considered to be at a low risk for Covid-19. The mayor mentioned St. Petersburg in Russia and Guangzhou, Shanghai and Shenzhen in China.

Along with accommodating tourists under the Special Tourist Visa, the mayor says they are planning for other travellers that are approved by the Centre for Covid-19 Situation Administration. The nearest international airport to Pattaya, U-Tapao, remains closed to international traffic.

A special tourist visa updates and it seems the Thai government is opening up categories that would be able to apply for the new STV.

Captains, crew and passengers travelling from countries considered at low risk will be able to dock in Thailand and enter the country, of course after doing their 14 day quarantine and all the other STV paperwork.

A fuel tanker has exploded after a collision with a trailer truck, causing both vehicles to be engulfed in flames in a series of explosions in Buri Ram, north east Thailand.

Fuel from the 40,000-litre tank spilled out onto the road, spreading about 1 kilometre to nearby homes and into the sewers. 20 cars, motorcycles and tuk tuks parked along the road were damaged or destroyed in the conflagration. Many people were injured, currently we don’t don’t have the latest toll.

The fuel tanker truck and the trailer truck collided on Highway 24. The drivers were able to flee before the first explosion.

50 fire engines responded to the fire and the road was closed off for a radius of 5 kilometres. It took firefighters more than 4 hours to extinguish the fire.

An MP from the Move Forward Party, one of the opposition parties, has been banned and could face jail time after the Constitutional Court found the MP guilty of violating a law prohibiting media shareholdings for MPs.

57 other MPs were acquitted over the same offence.

Tanwarin is Thailand’s first ever openly transgender MP in the House of Representatives and an advocate for LGBTQ rights. The MP is also a former actor and filmmaker. The Court looked into lists of shareholders and found “irregularities,” saying information had been fabricated to make it appear that she wasn’t associated with the media companies.

The Election Commission may also decide to press charges on Tanwarin. If the commission finds her guilty of breaking the law on elections, the MP could face a penalty of up to 10 years in prison, a 20,000 baht fine and a ban from taking part in elections for 20 years.

Thanathorn and 4 others charged over Pathumwan flash rally

Meanwhile, the Pathumwan Municipal Court has accepted for trial the prosecutors’ indictment of Thanathorn, the former Future Forward leader, and four others relating to a flash protest rally on the Pathumwan skywalk last year.

All five were present at the court today. The indictment concerns their rally on the elevated BTS walkway at Pathumwan intersection on December 14 last year.

Vietnam deployed soldiers and heavy machinery to search for survivors after landslides triggered by torrential rains from Typhoon Molave, one of the strongest typhoons to hit the region in decades.

Landslides, which hit remote areas in the central province of Quang Nam on Wednesday, killed at least 13. Rescue efforts are being hampered by bad weather at the tail end of the storm.

The Vietnamese government said Typhoon Molave had left millions of people without electricity and damaged at least 56,000 houses.

26 fishermen also remain missing after their boats sank when trying to return to shore on Tuesday. Molave is moving westward through Laos now and will dump rain in northeastern Thailand into the weekend.