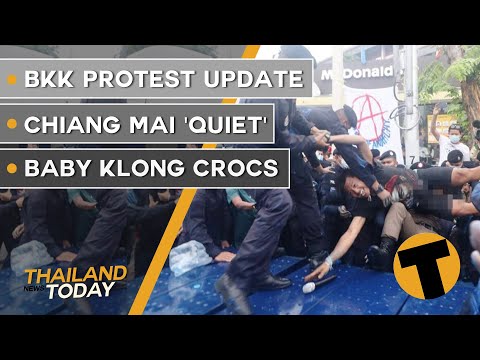 Daily TV news about what’s happening in and around Thailand. Check out the daily Thai News, uploaded around 5pm, Thai time, weekdays.

Things are heating up ahead of this afternoon and this evening’s protests and planned march to Government House from the Democracy Monument.

Even the United Nations Department of Safety and Security has issued its own warning about today’s pro-democracy rally in Bangkok saying it promotes an “elevated risk of unrest” after 21 protesters were arrested yesterday.

Some protest organisers started setting up yesterday, also protesting a Royal motorcade which has been scheduled to pass along the protest route. Some protesters also splattered blue paint on officers. 21 of them  were arrested on charges of placing objects in the road, using a sound amplifier without permission and creating a gathering of more than 10 persons, conducting an act of violence, or an act that breaches the peace.”

The UN office is near the Government House where the protesters say they plan to “set up camp” later today. The Thaiger will be on site later this afternoon with all the latest news and information, live from the site.

Chiang Mai’s tourism industry has drastically slowed down from the lack of travel due to the affects of the Covid-19 pandemic – the lockdowns and the travel restrictions.

Tourists “vanished” during the April lockdown, according to president of the Tourism Association of Chiang Mai. Now, as the chilly, cool season approaches, when the northern province is the most popular for locals, Chiang Mai’s tourism sector is likely to remain “slow” with little hope that domestic tourism, alone, will do much to help the northern city’s business prospects.

The impacts from reaction to the pandemic has effected various people and business groups in Chiang Mai. Only 35% of the hotels have reopened, and those that are open report extremely low occupancy rates. Even the drivers of the red songthaew taxis, used to do 3 to 4 round trips per day. Now only 1 trip per day on average, and that’s with some drivers taking temporary leave and much-reduced fares per trip.

5 female students from a Khon Kaen school, in north east Thailand have filed an official complaint of sexual abuse against a teacher at the school.

They are accusing the director of Ban Thung Mon School of sexual assault. The girls have filed an official police complaint. A female teacher accompanied them to the police station after they told her what had been going on.

It’s understood the girls are all Grade 8 students and the children’s parents have been consulted to confirm if they wished to bring charges. Similar allegations have been made about the school director in the past, by students from grades 6 to 9. The teacher has not been named in the media at this stage.

Thailand’s Digital Economy and Society Ministry says people shouldn’t fall for claims that leaving your mobile phone beside your head at night will result in cancer.

The ministry is urging people not to believe that electromagnetic waves from the phone will cause brain cancer, adding that such a claim constitutes “fake news”, and saying Thai citizens should refrain from sharing such nonsense on social media. They said…

It sounds like the making of a cheesy Thai shock/horror movie, complete with exaggerated camera zooms and fake blood…. The attacks of the killer klong crocs.

People living on the banks of Khlong Prapa in Bangkok’s Prachachuen area are worried that the canal may have be a crocodile habitat after a baby croc was spotted swimming in the water and resting along the banks of the local klong.

Photographs of the baby crocodile is promoting locals to stand by the canal hoping to catch sight of the crocodile. Residents have been warned against swimming in the canal as it may be dangerous. We’d advise staying out of the canals for 100 other reasons as well.