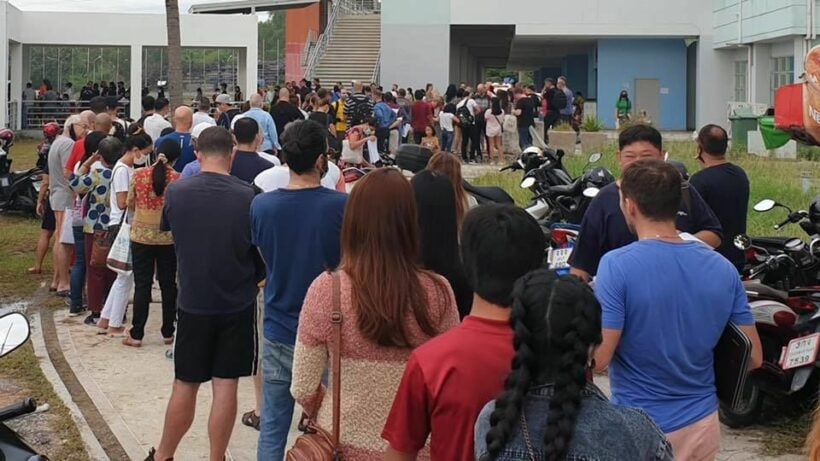 With September 26 just a day away, Thailand’s Immigration offices have never been busier. Many expats and visitors, who have been either stranded in Thailand, or decided to wait out Thailand’s outbreak of Covid-19, need to get their visas sorted out, officially, by September 26. Whilst many foreigners have left things to the last minute, here’s the latest in the situation.

Many of the immigration offices stayed open late every day this week to work through the appointments that had been made. We should at least applaud the work ethic of the officials as they are doing their best to apply the Government’s immigration rules and are open extra hours to help foreigners. Be assured the officials are probably as stressed as you. Smile and say ‘thanks’ when you get you stamp!

Also, because the amnesty finishes on a Saturday, you will legally be able to go in on Monday as well to sort out your lapsed visa, or roll over onto a 30 day extension, if you are eligible.

In most cases, it needs to be stressed, you will need to make an appointment before going to immigration. Don’t just arrive there with a handful of documents and your passport and hope for the best. The link to the Thai Immigration website is HERE. It is not particularly easy to navigate so be patient.

If you don’t have a visa extension or a new visa by the end of Monday, or a visa pending, by the close of business on September 28, you will living in Thailand illegally and will face hefty fines, arrest and possible deportation.

The social media on the matter has been just as busy, with people sharing their views on the amnesty and the Thai government’s reluctance to further assist the foreigners that have remained in the country since the borders were closed in April. Different Immigration offices, different stories. (We’ve fixed up some of the grammar and spelling)

“This is absurd and insulting. People that are here, healthy and contributing to the economy, and they have no easy way to remain. All the while the government is trying to attract people to come here. Let those who are here stay and continue spending money.”

“Thai immigration did not create this problem. It was created by everyone who waited till the last week. Self fulfilling karma.”

“In Bangkok it takes the travellers who are stuck here about 2 hours to get there and people who do get there without appointment send home to make one and there are no new appointment up to the 26 any more so no choice for people to be illegal soon.”

“Not to state the obvious, but anything can change last minute here in Thailand. You never know…”

“Here in Chonburi immigration they only allocating 100 que numbers per day. About 500 waiting with no que number. Official look to close off processing before lunch time leaving the office closed for business. Amazing Thailand indeed.”

“It really doesn’t help that UK (embassy) in Thailand decided, with total disregard for the Thai immigration system and the British citizens it serves, to wait until the very last minute of the amnesty to grant TV extension letters. Flooding the system at a time when it is already significantly overstretched.”

“Many here in Phuket went before and were told to come back this week!”

“Not necessarily waiting till the last minute, but I think many have been trying to make arrangements via any number of visa schemes while at the same time, even before Covid, the various offices would need months to process. It could be muddled further when they announced the new tourist visa (STV) which many thought the logical move would be to allow the rollover to happen, and still could.”

What are your thoughts and experiences with the amnesty and your extension, or failure to secure an extension? Respond in the COMMENTS section below.