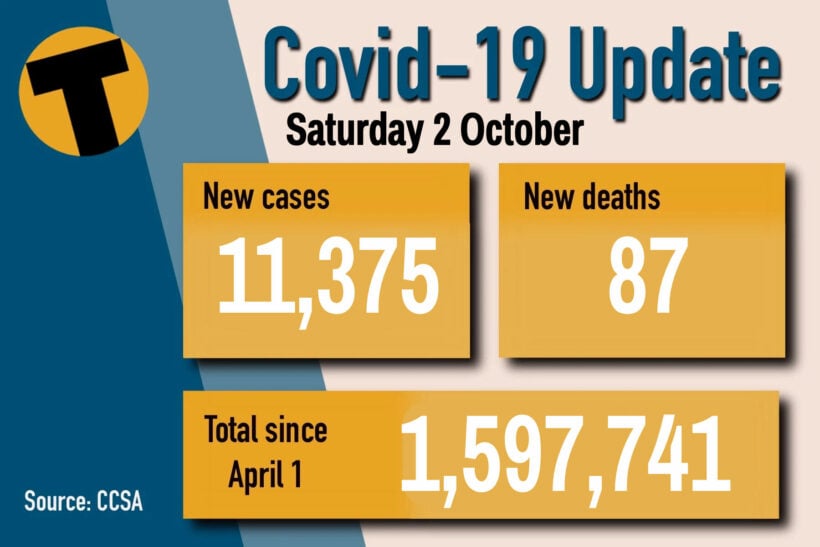 Today, the CCSA reported 11,375 new Covid-19 infections. Coronavirus-related deaths fell below 100 for the first time in months with 87 deaths. Since April 1, in the latest wave of the virus in Thailand, a total of 1,597,3741 confirmed Covid-19 infections have been reported.

In the 24 hour period since the last count, the CCSA has reported 13,127 recoveries, 654 more than yesterday. There are now 113,394 people currently receiving treatment for Covid-19, 1,839 less than yesterday, though 16 more people were put on ventilators, one of the very few negative figures in today’s Covid-19 report.

Out of the new cases, 184 were found in correctional facilities. Just under 70,000 inmates at Thailand’s overcrowded prisons and detention centres have tested positive for the virus over the past several months. 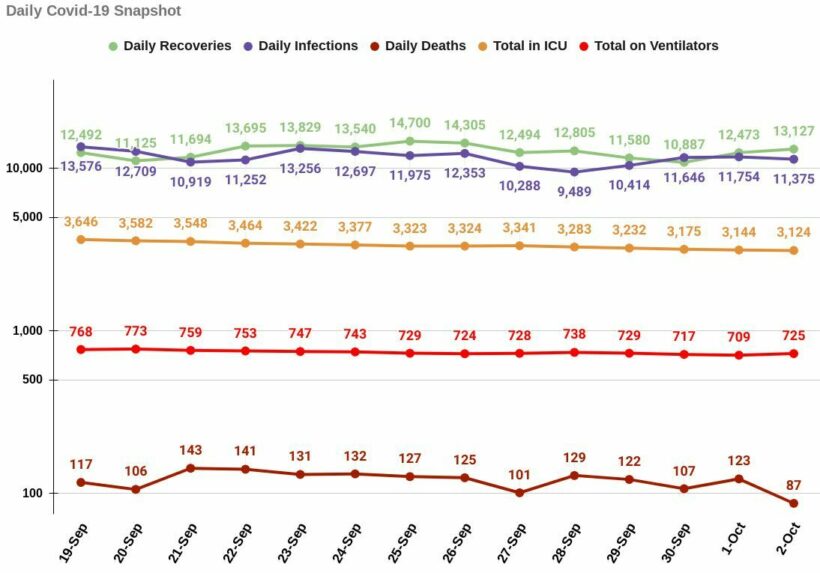 Vaccination data continues to be inconsistent, with the number of third vaccine booster shots administered mysteriously falling by 162,000 between September 17 and September 18. Also, while various government and news sources touted that, in celebration of Mahidol Day, somewhere between 1 million and 1.3 million vaccines were administered, the official figures from the Department of Disease Control show the number of vaccines given on September 24 to be only 765,898.

Now, the reported number of vaccines given on the last day in September is listed by the DDC to be a staggering 2,288,728 injections, with over 1.3 million people receiving their second doses that day. It seems like such an impressing accomplishment would be exalted and heralded in the press, but the record-shattering achievement seems to have gone unmentioned. 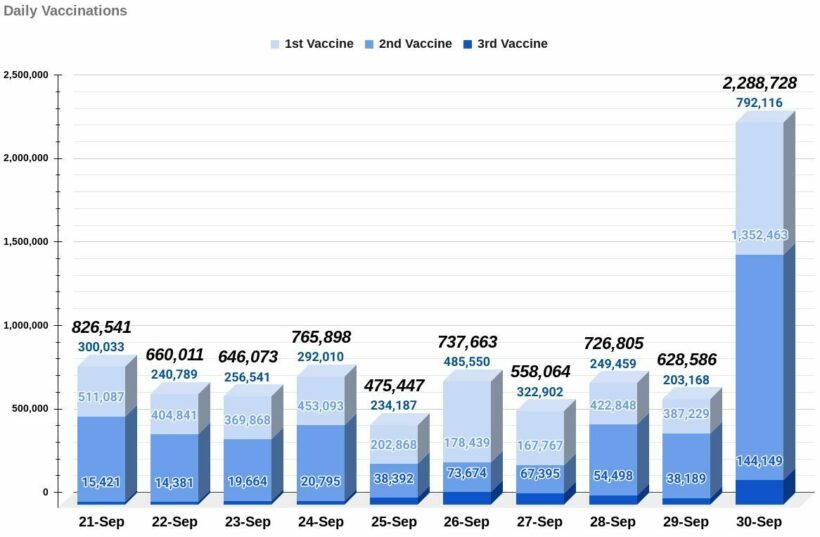 More information and provincial totals will be reported by the CCSA this afternoon.

AussieBob
2 hours ago, HiuMak said: Why give in and relent? Where is morrison's voice now? A bit of give and take going on at the moment. China is not used to being challenged about their unfair and discriminatory actions, but…

AussieBob
11 minutes ago, palooka said: MONEY is the logic now. Govt getting desperate for income. Debts mounting, baht on the slippery slide. That is always true.  But their big driver is not only the economy etc, it is also their…

palooka
12 minutes ago, AussieBob said: That is always true.  But their big driver is not only the economy etc, it is also their and their political allies falling likelihood of winning the next elections in 2023.   The one that Anutin…

AussieBob
6 minutes ago, palooka said: Until they change the Constitution Prayut still stays, or until another General thinks he's getting screwed financially, and Prayut goes to live somewhere he can live in luxury.  The Constitution is the real sticking point…

palooka
13 minutes ago, AussieBob said: I understand the issue you speak of, but is not the PM nominated by the main Party from the elected representatives in the House - and then House and the Senate votes Yes/No?  I believe…

Thai baht to continue dropping against the USD