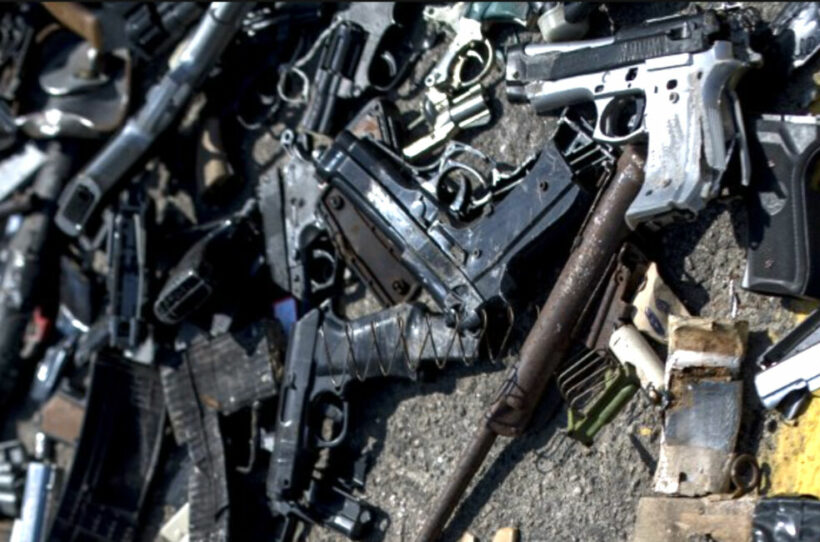 FILE PHOTO: Over 300 illegal firearms were seized in Thailand recently.

In a countrywide push to get illegal firearms off the streets of Thailand, police have announced that they made 51 arrests and seized over 300 guns. The campaign to crackdown on illegal guns was initiated in response to the recent surge in crimes across Thailand that have been committed using firearms.

Police reported that, along with the 300 guns they have confiscated, they had also taken into possession over 3,500 rounds of ammunition with a variety of different calibres. While they say many of the weapons seized were handguns, they did also collect some military-grade weapons.

The haul of illegal firearms was put on show at the offices of the Central Investigation Bureau ,as is common in Thailand whenever police impound an impressive quantity of many types of contraband.

Police say that their crackdown on illicit firearms has specifically targeted places that were speculated to be manufacturing illegal weaponry. They also tracked and busted illegal gun trading and sales through online vendors and marketplaces.

The majority of the 300 guns confiscated by police during this push came from Bangkok, Chiang Rai, Nakhon Pathom, Pathum Thani, and Suphanburi provinces.

Police say that all the seized illegal firearms will undergo forensic testing and analysis to identify if any were used in any known crimes or linked to any sort of criminal activity. Some suspects were reported to have admitted that the weapons came from abroad and were smuggled across land borders with neighbouring countries into Thailand.

AussieBob
53 minutes ago, Jason said: If you want to see what two very divergent approaches to the gun question, see what happens in the US and what happens in Australia. One has open access to firearms, the other doesn't. See…