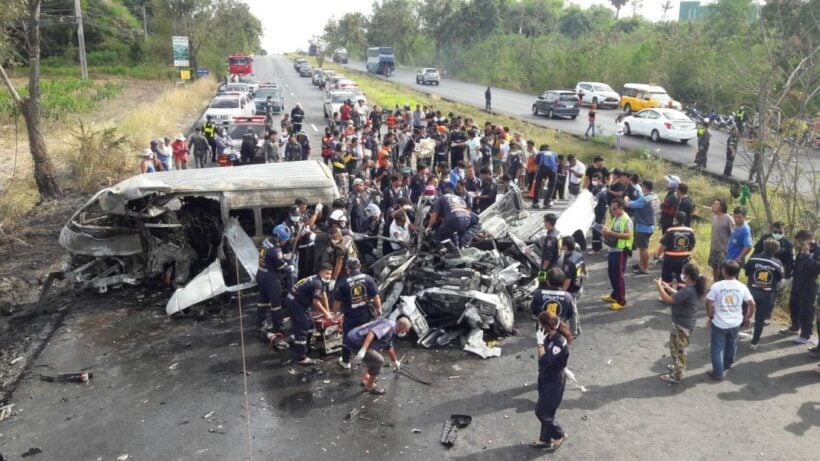 At least 10,794 people have lost their lives on Thailand’s roads this year. This tally, with only two months remaining, is a timely reminder of the danger that lurks on Thai roads from Dr Taejing Siripanich, secretary-general of the Don’t Drive Drunk Foundation.

Statistically, compared to last year, this is a drop in overall deaths on Thailand’s roads.

But Taejing said the toll isn’t an accurate reflection of the real number of people that have dies as a result of road accidents. He say it’s based on statistics compiled between January 1 and October 21, and only takes into account only deaths recorded at the actual scene of the accident.

“This means road fatalities are actually higher because some victims succumb to injuries later in hospital.”

He says he has spoken out as result of several tragic road deaths during last weekend’s appalling weather that swept across the central regions of the country.

Last Sunday, a van skidded into a roadside tree and caught fire in Kamphaeng Phet killing nine Burmese workers and injuring six others, including the Thai driver. The van was licensed to carry 14; it had 15 onboard at the time of the incident.

On the same day a car ran into the railing on the side of a bridge in Ayutthaya killing another six people. And then, in Nong Khai , a car ran into a swollen creek killing four more.

In Khon Kaen a bus with 32 passengers overturned on a road. A 20 year old law student at Mahasarakham University on the way to hospital.

The Khon Kaen governor says that eight of the crash victims remain hospitalised due to their serious injuries.

“Two of them are in critical condition,”

“The bus driver also passed a blood-alcohol test, so the accident could have occurred as a result of the slippery road and poor driving conditions.”

An examination of Thailand’s road deaths show that the leading causes of death are drunk driving and speed. Young male motorbike riders, not wearing helmets, are the leading demographic of road fatalities in Thailand.

Restoring faith to the national airline