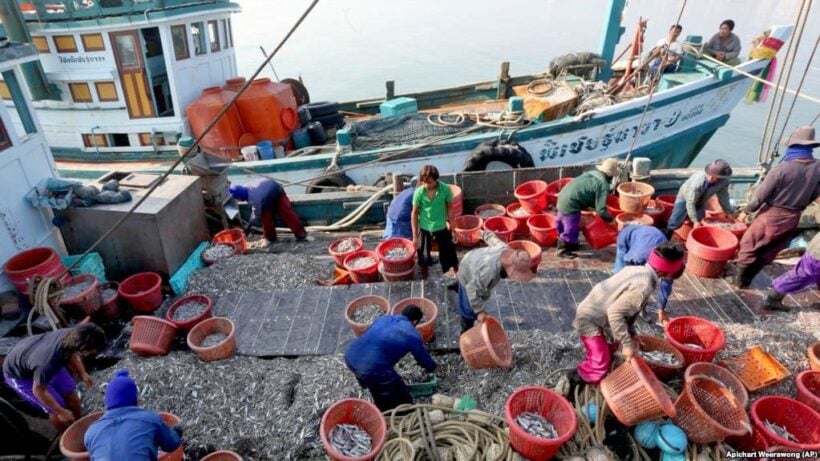 Kobsak Pootrakool, from the PM’s Office says that the European Union (EU) decision to lift its yellow card status on the Thai fishing industry practices reflects significant progress made by the Government in recent years.

“The government continues to work hard to improve the state of fishery industry regulations and administration. The next step is to make the fishery industry a key factor in driving Thailand’s economic growth.”

Being spared the “yellow card” will yield three key benefits to Thailand: boost Thai exports to the EU, improve Thailand’s reputation internationally, and indirectly benefit other industries in the production chain, according to Kriengkrai Thiennukul, vice chairman of the Federation of Thai Industries (FTI).

The EU also recognised the efforts of Thai authorities in tackling human trafficking and improving labour conditions in the fishing sector.

Fishery exporter are expecting a boost after the EU lifted their “yellow card”. It’s also believed that the EU move will also improve the industry’s practices and reputation.

Meanwhile Greenpeace is welcoming the EU decision to lift the ‘Yellow Card’ sanctions following the ratification of C188 – Work in Fishing Convention.

Greenpeace recognises that it is almost four years (April 2015) since the EC gave the Royal Thai Government an official warning for its failure to combat ‘Illegal, Unreported and Unregulated’ fishing.

“We applaud the Thai government for taking the necessary and essential steps towards reform in the Thai fishing industry. It is imperative that private, public and third sector stakeholders both in and outside of Thailand all continue to take responsibility and work together to ensure that only sustainable and ethically produced Thai seafood reaches shelves, freezers, sushi bars, and cat bowls around the world.”

“While real progress is being made, we believe Thailand’s fisheries reforms will only be truly effective with the actual implementation and eventual elimination of outdated and unlawful practices adopted by some unscrupulous, exploitative and destructive operators within Thailand’s fishing industry.”

“We will continue the fight against IUU fishing in Thailand and Southeast Asia with Thailand now at the helm of the Association of Southeast Asian Nations (ASEAN).

Together with our coalition partners, we will keep a watchful eye on those who may look to exploit loopholes in the legislation and work to encourage neighbouring countries to adopt similar reforms.”

Man shot dead by colleague in front of daughter