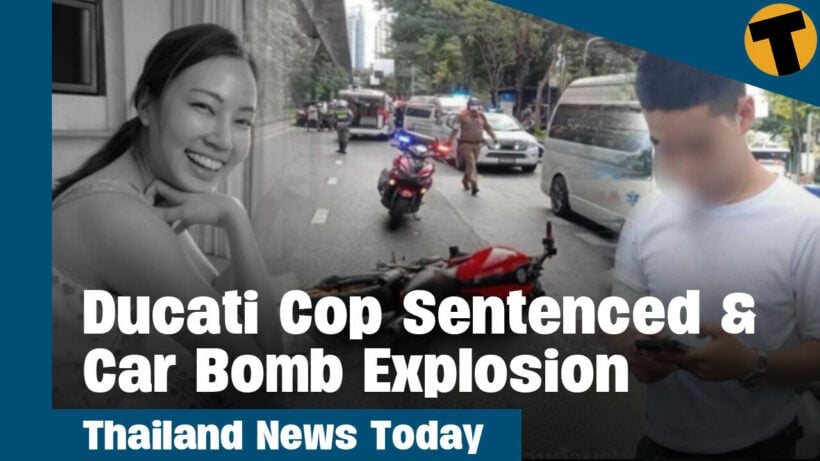 Starting off the news today with some updates on the case of The crowd control police officer who killed an ophthalmologist with his motorbike at a zebra crossing in Bangkok in January. ….he has now been sentenced to prison today.

The officer will serve a 1 year and 15 day prison sentence and pay a 4,000 baht fine. He has been charged with 9 different counts.

Today at 9am, the Criminal Court sentenced Norawich to one year and 15 days in prison without parole —and a 4 thousand baht fine

Norawich was temporarily ordained as a monk to make merit for Dr. Waraluck, —sparking outrage among members of the public,— criticising him for ‘praying away his sins’.

Sitha from the National Office of Buddhism says that someone facing criminal charges should never enter the monkhood.

Following the incident back in January, ——safety advocates pressured the government to make changes to the law so that those who caused death while violating pedestrian safety rules would be charged with manslaughter.

Thai PM Prayut Chan-o-cha has ordered the relevant authorities to host “economic roadshows” to draw foreign investors back to Thailand.

The first event was held in Japan earlier this month, —from April 13th till the 23rd, —-—with similar events planned for European countries, ——as well as the US, ——South Korea ———and Taiwan.
During a press conference this morning, deputy spokesperson Trisulee Trisaranakul ——said PM Prayut wanted the end of the Songkran festival to be the start of the nation’s economic recovery plan.

Firstly, ——the government would drop the Test & Go program on May 1, ——as reported after the Centre for Covid-19 Situation Administration’s meeting on April 22.

According to a government report, ——Thailand had more than 700 foreign investment projects in 2020, ——generating an investment value of about 4 hundred and 50 billion baht.
The spokesperson also said deputy PM Suphatpong Phanmechao would be in charge of the roadshow plans. ——The deputy PM would also prepare to supply foreign investors with the relevant information regarding investment promotion measures, ——advantages of investing in Thailand—— and related measures that have previously been announced.
The spokesperson added that the first roadshow had already happened in Japan because there are many Japanese investors in Thailand, and Japan is one of the world’s top car manufacturers.

According to the report, Thailand has been promoting the Long-Term Resident Visa, or LTR, ——and measures to encourage the investment in electric cars and S-curve industries like robotics,—— electronics—— and medical technologies, ——as well as aviation and logistics.

A car bomb exploded over the weekend near the first Thai-Myanmar Friendship Bridge, on the Myawaddy side of the border, adjacent to Mae Sot district. Residents in Mae Sot reported they could clearly hear the blast, which happened late Saturday night.
An anti-government group is suspected to have planted the explosive in a car parked at the foot of the bridge near the front gate of the Myawaddy border checkpoint.

After the explosion, the neighbourhood experienced a power surge and around 30 gunshots could be heard moments later. Many vehicles and buildings in the area were reportedly damaged, including four story buildings. No deaths were reported.
In response, local security forces strengthened their operations along the border, including village security units, a rapid deployment unit from the Naresuan Force and Company 346 of the Border Patrol Police.
One unit pursued a large number of Myanmar citizens who had fled across the border to Thailand by the Moei River prior to the explosion. A total of 49 illegal migrants were arrested, including 24 men and 25 women, who confessed they were waiting for job agencies to take them to Bangkok and other cities.
The detained migrants claimed to have paid employment brokers 20,000 baht each. Unfortunately for them, they’ll probably be deported after visiting the Mae Sot police station.

Top members of Thailand’s Democrat Party have resigned in the wake of a sex scandal that’s rocked that party in recent weeks. Senior politician Kanok Wongtrangan announced on Facebook today that he has quit his role as a deputy leader in the party out of “moral conscience”.

His resignation follows that of deputy prime minister Wittaya Kaewparadai, who resigned from the party on Friday, citing the ongoing sex scandal involving another former deputy leader, Prinn Panitchpakdi, whom many women have accused of sexual assault and rape.

Kanok said that he decided to reign because the party’s response to the sex scandal has failed to meet the expectations of the public, who have questioned the executive committee’s moral accountability. His statements echo those of Wittaya, who on Friday warned the party’s executive committee that it must do more to restore the party’s image, which has been seriously tarnished by the allegations. His solution? Resign.

On April 14, Prinn resigned from his post as deputy leader and gave up his party membership in order to fight claims of sexual assault filed against him.

So far, ——at least 18 women have filed an avalanche of sexual assault allegations against the politician. Some cases date back to his time in the UK and include allegations of rape. Prinn resigned after his first accuser, an 18 year old woman, filed a complaint with police earlier this month. Since then, many more women have come out to accuse him of sexual assault.

Wittaya,—— who is himself a former deputy leader, is also a former MP, health minister, and government whip chief. He said that he’s been a member of other political parties in Thailand, but that he’s been most loyal to the Democrat Party.

Wittaya said he might return if the party undergoes major changes. If not, then Thailand’s oldest political party would have “no future”. ——According to him, ——someone must be held accountable for how the party handled the scandal, Thai PBS reported. ——For many observers, that someone is Jurin Laksanawisit, ——who earlier said he would not resign from his post as leader of the Democrat Party.

Speaking to reporters after the Democrat Party’s general assembly on Saturday, ——Jurin said that the executive committee would remain in place while they work to resolve the controversy surrounding what is set to become Thailand’s largest #MeToo scandal to date. —The deputy prime minister also reiterated that he would not resign from his post or the party.

This follows Thailand’s rekindling of relations with Saudi Arabia after decades of cold vibes between the countries due to the notorious so-called ‘Blue Diamond Affair’. ——Last month, ——Thailand’s labour minister said over 1 thousand people have registered online with the Department of Employment to apply for jobs in Saudi Arabia.

But officials have also become aware that many Thais have been lured into working in other countries by scammer gangs. ——This has notably happened with Thais who travelled to work in Cambodia. ——There were also cases when scammers tricked Thais into working as farmhands in Australia, ——and in so-called ‘spas’ in the United Arab Emirates.

Last month, ——police in Chachoengsao, a province east of Bangkok, ——arrested a woman suspected of tricking another woman into working as a prostitute in the UAE. ———She is one of six suspects in the case.

The alleged victim told authorities she was invited to work as a masseuse at a spa in Dubai.———The DoE’s director-general said all input from the meeting would improve the welfare and legal protection aspects for Thai migrants. ——The department chief said it has opened forums to educate job seekers about overseas employment ——and conduct THOROUGH background checks of job placement firms nationwide.***