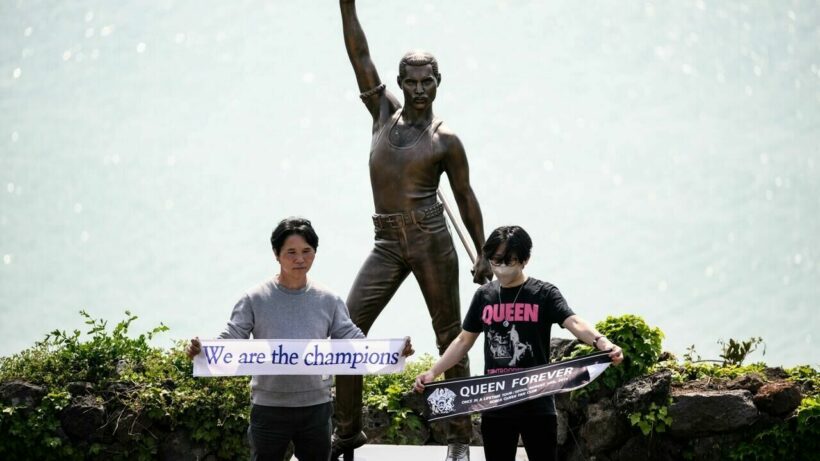 After an 8 year-long quest, a South Korean ‘Queen’ superfan fulfilled his dream of honouring his late hero Freddie Mercury by erecting a life-size statue of him on the popular Jeju Island in South Korea.

Queen’s music was banned in South Korea in the 1970s by then-military dictator Park Chung-hee. The regime deemed the British rock band’s music “unsuitable” and banned men from growing their hair.

The man behind the 1.77-metre-high bronze statue is 57 year old South Korean businessman Baek Soon-yeob. Soon-yeob used to illegally listen to pirate copies of Freddie and Queen’s music as a teenager when the band’s music was banned.

The man first sent an email to the band in 2014 asking for the rights to build the statue. He wrote to them once a month for 7 years, finally getting a reply in 2020. Band members agreed to meet Soon-yeob at Queen’s first ever concert in South Korea that year.

There is only one other Freddie Mercury statue in the world, located in Montreux in Switzerland, where Freddie lived and recorded some of his albums.

But the statue hasn’t been welcomed by everyone. Soon-yeob said he hoped the statue would help “people who criticise sexual minorities to reconsider their views”. However, homosexuality is still a sensitive subject in South Korea and some local residents complained about having a “statue of a homosexual” built near their homes.

Bluesofa
8 hours ago, Thaiger said: honoring his late hero Freddie Mercury by erecting a life-size statue of him on Jeju Island in South Korea. Going on the rumours circulating after his death and the contents of his stomach, surely this …