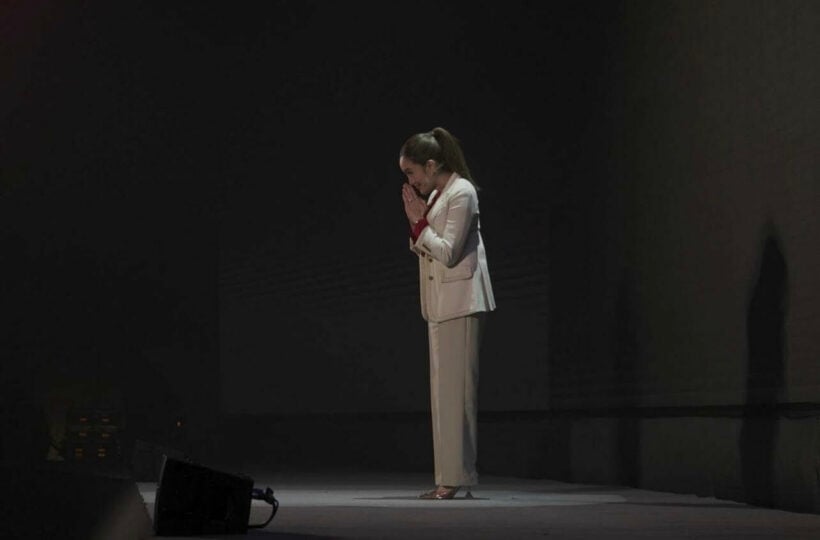 Panthongtae Shinawatra, the daughter of exiled former Thai PM Thaksin Shinawatra, has repeated her call for supporters to vote for the Pheu Thai Party in Thailand’s upcoming general election. Addressing party members at her party’s general assembly on Sunday, she said only a “landslide win” would do.

“Pheu Thai is ready to work after a House dissolution. A landslide win. That’s the only thing that Pheu Thai wants.”

As the party’s “chief advisor on participation and innovation”, Panthongtae is pegged to become the party’s nomination for prime ministerial candidate, though she has not yet formally thrown her hat in the ring. Her aunt, Yingluck Shinawatra was the Thai PM before May 2014 when the Army staged another coup and installed the military-run NCPO.

However, as the ‘heir’ of Thailand’s controversial political dynasty, Panthongtae aka “Head of the Pheu Thai Family” appears to be keeping her chances of running for the country’s top post alive. If elected, she promised that Pheu Thai would welcome home Thais who fled abroad when the military staged a coup in 2014.

Both Yingluck Shinawatra and Thaksin Shinawatra live overseas in political exile. Among the party’s many plans for Thailand, she said they would develop a technology-driven nation capable of competing with the rest of the world.

“When the day comes for Pheu Thai to return to power, we will get down to business of tackling the country’s problems.”

Politicians are already in unofficial election mode ahead of the next general election, which pundits say Prime Minister Prayut Chan-o-cha could call as early as November this year.

Earlier, the Pheu Thai Party announced it would declare their candidate for PM once the House is dissolved, which they predict will happen later this year, prompting an election sometime in early January, according to the Bangkok Post.

35 year old Panthongtae says her goal is to win over the younger generation and convince them to support and join the party, which has won the most seats in every election since 2001.

The party has concentrated its efforts on laying the foundation for tackling Thailand’s problems and making plans for the future. The party favours decentralisation of power, better public health services and the use of soft power.

According to the party, Thailand’s agricultural industry should embrace the use of artificial intelligence to boost agriculture production, and a digital transformation is necessary to help combat government corruption.

If the party wins the upcoming election, they would set a benchmark of boosting the number of international tourists by 80 million within 4 years (that would twice the number of tourists visiting Thailand than the last year of ‘full’ tourism in 2019).

Pheu Thai Party’s leader, Cholnan Srikaew, informed supporters that only a large victory of 250 seats or more would allow the party to execute its plans and fulfill its objectives.

Despite its popularity, the Pheu Thai Party has been dissolved twice by the military and Thai judicial system.

TSS
no chance. That old uncle creepy creep that wears silly pink and purple suits & sports a jet black combover will figure away to make her go away

Benroon
I see the chances of a decent political debate have already come off the rails 1 hour in - oh well.

Bluesofa
7 hours ago, Rebel said: I was with it until I came to the part about 80 millions turist then my chain fell of. 9 hours ago, Thaiger said: If the party wins the upcoming election, they would set…

Faraday
Where do these considerably over-optimistic, tourist predictions come from? I believe there will not be a dry leg in the house. 🤣
TWS60
Let the games begin. Again. 🥷

A car bomb exploded over the weekend | Thailand News Today