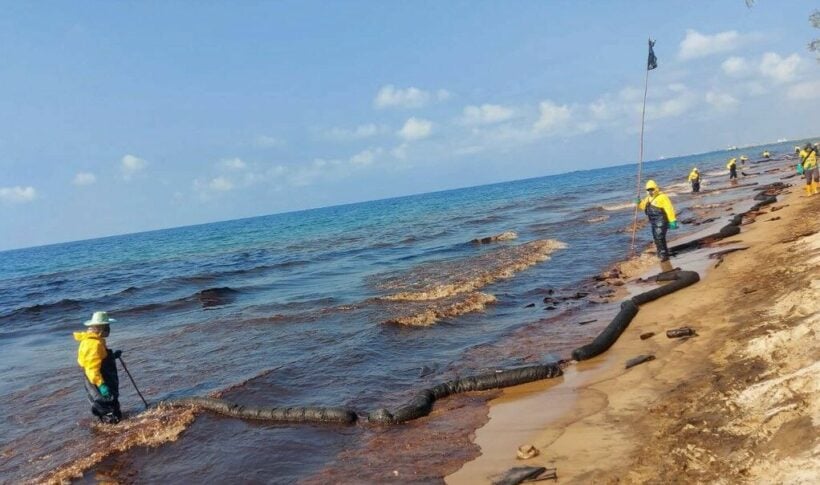 Red flags have been placed at Rayong’s Mae Ram Phueng beach, following a recent oil spill in the eastern province, with officials advising swimmers to stay away, again. According to a Thai PBS World report, the Pollution Control Department says high levels of total petroleum hydrocarbon have been detected in the areas and people should not swim in the water or play in the sand.

The contamination follows a January 25 oil leak from a ruptured pipeline owned by the Star Petroleum Refining Company, which emptied around 47,000 litres of crude oil into the sea. A second leak followed on February 10, this time involving 5,000 litres.

Yesterday, PCD chief Attapol Charoenchansa said inspectors found unsafe levels of TPH in 3 areas of Mae Ram Phueng beach. The levels exceed the standard level by 1.5 times and Attapol says the provincial governor has been asked to place red flags at the affected locations and to close the areas to swimmers and other beach-goers.

The PCD says its inspectors will continue to monitor the area until the TPH levels come down. Attapol says substances from the oil leak are still being discovered in the waters off Rayong.

There’s also been another dump of oil, this time the captain of an ageing oil tanker is facing charges for violating the Navigation in Thai Waters Act by discharging around 3,000 litres of oil into the sea off Chon Buri province.

A Royal Thai Navy spokesman reported yesterday that the 30 – 40 year old tanker was found to have discharged oil mixed with water into the sea, as it was cruising in the Gulf of Thailand west of Koh Chuang in Sattahip district, about 15 kilometres south west from the Rayong main city area.

DoUKnowWhoIAm
14 minutes ago, Thaiger said: advising swimmers to stay away. Thanks for the heads up.

AdvocatusDiaboli
Attapol says the provincial governor has been asked to place red flags at the affected locations and to close the areas to swimmers and other beach-goers ….. Notice they did not mention the word Tourist! Must not be enough to…
think-and-ask
panic /terror of, viruses, bad climate /nature and wars, is not believed, by most in world, anymore. it endes soon. :)
harry1
the whole incident has been mismanaged,then having to apply at the local police station to get permission to repair existing leaks that should had been detected in the first instance
Cathat
This is taking way to long to sort out.suprised it's not got more press.