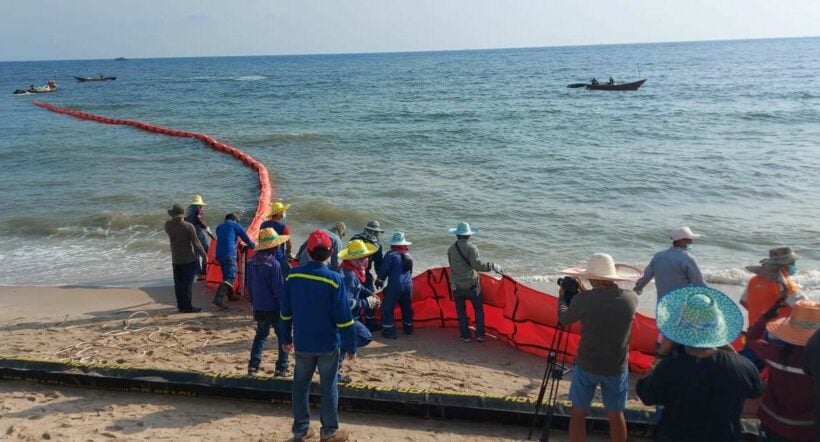 Officials in Rayong are pulling out all the stops to protect the eastern province’s beaches from an oil spill 3 kilometres off-shore. According to a Nation Thailand report, provincial governor Channa Iamsaeng says the crude oil is currently headed for the beaches of Mae Rampueng and Khao Laemya.

Workers have placed a “beach boom”, or barrier line, in the sea, in an attempt to hold the spill back from the shore. Khao Laemya National Park officials are working alongside workers from petroleum and petrochemical firm IRPC and Star Petroleum Refining, owners of the undersea pipeline that has leaked thousands of litres of crude oil into the waters around Rayong. Nation Thailand reports that local officials are confident the oil spill will not reach the popular tourist island of Koh Samet. However, they continue to monitor developments.

The news of a potential environmental disaster for the popular beaches couldn’t come at a worse time with the eastern seaboard tourist hotspots eagerly awaiting the re-opening of the Test & Go programme of the Thailand Pass. Registrations are set to start again on February 1.

Renowned marine expert, Thon Thamrongnawasawat, says it’s likely that tar balls will head for the shore following the clean-up of the “first wave” of the spill, similar to what happened following a 2013 oil spill in the same area.

“The second wave of tar balls came in succession for many days. Given the 2013 experience, the second must follow for 1 to 3 weeks. I still cannot gauge the potential impact. It depends on where the spill reaches the shore.”

The marine biologist adds that he still has hope that only the smallest amount of oil would make it to shore, given the ongoing efforts to stop it.

Oil from the Rayong pipeline leak reaches the beach