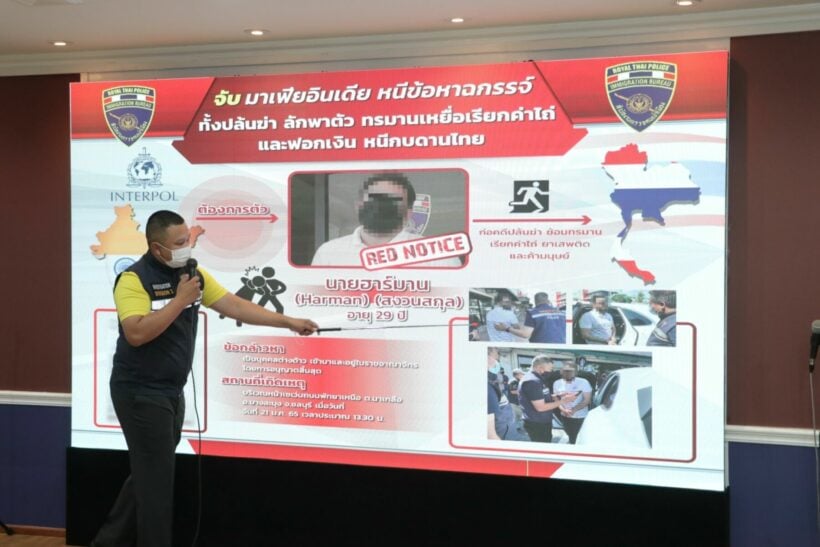 An Indian mafia member was arrested in Pattaya after a red Interpol notice. He was allegedly involved in robbery, murder, human trafficking, ransom and money laundering in India. But Thai police have already confirmed that there is no links between the arrested man and the ‘hit job’ on Indian citizen Jimi “Slice” Sandhu on February 4.

The Pattaya suspect reportedly entered Thailand to hide from Indian and international police around June 2019, and his passport expired 448 days ago.

Police say they have found no evidence that the suspect had committed any specific crimes in Thailand.

On February 24, the 29 year old suspect, referred to as “Haman”, was arrested at a convenience store on Northern Pattaya Road. Thai media reported he is considered a threat to the country, even though he has no criminal record in Thailand, according to the Deputy Commissioner of Immigration Police in Chon Buri.

The Deputy Commissioner said there was evidence that while in Thailand he had contacted his gang in India and asked them to commit different crimes.

Haman was initially charged for overstay. Police say they will conduct further investigation before deporting him back to India.

Following the Canadian murder case in Phuket, the Immigration Bureau told Thai media that authorities check and verify the status of each foreigner in Thailand more carefully now to prevent similar cases from happening in the future.

Authorities also said there was no policy to ban people from entering Thailand from Ukraine or Russia, despite the situation there, saying they hadn’t found any suspicious activities from visitors from either country.

CCSA says no travel restrictions over Songkran this year, but no parties either