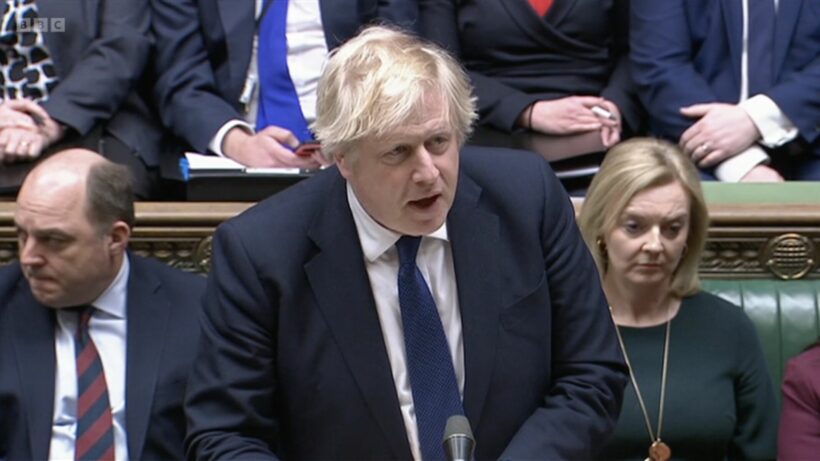 In an address to members of parliament, UK Prime Minister Boris Johnson announced what he is calling “the largest and most severe package of economic sanctions that Russia has ever seen”.

The new sanctions target Russian oligarchs and banks, which will now be excluded from UK’s financial system. Additionally, the Russian national airline Aeroflot will be banned from landing flights in the UK and in the airspace controlled by UK air traffic control.

The UK is implementing the sanctions in response to Moscow’s invasion of Ukraine, which began with air strikes in the early hours of Thursday morning and has since targeted major cities across the country, as troops advance from three fronts along the northern, eastern and southern borders.

“We will continue on a remorseless mission to squeeze Russia from the global economy piece by piece, day by day, and week by week and we will of course use Britain’s position in every international forum to condemn the onslaught against Ukraine.”

“And we will continue to counter the Kremlin’s blizzard of lies and disinformation by telling the truth about Putin’s war of choice and war of aggression.”

“And we will work with our allies on the urgent need to protect nations who are not members of NATO and who could become targets of Putin’s playbook of subversion and aggression.”

“And we will resist any creeping temptation to accept what Putin is doing today as a fait accompli. There can be no creeping normalisation, not now, not in the months to come, not in the years ahead. We must strengthen NATO’s defenses still further.”

Johnson says he has called for a meeting with NATO’s leader, which will take place in the coming days, and will be convening the countries that contribute to the joint expeditionary force, which is led by the UK is and comprised of both NATO members and non-members.

He also repeated his warning from last Saturday that the invasion would have global economic consequences, citing a strong rise in oil prices.

“The government will do everything possible to safeguard our own people, from the repercussions from the cost of living. And of course we stand ready to protect our country from any threats, including in cyber space.”

Above all, the House will realise the hard and heavy truth that we now live in a continent where an expansionist power deploying one of the world’s most formidable military machines is trying to redraw the map of Europe in blood and conquer an independent state by force of arms.

“And it’s vital for the safety of every nation that Putin’s squalid venture should ultimately fail and be seen to fail.”

“However long it takes, that will be the steadfast and unflinching goal of the United Kingdom.”

“I hope of every member of this house and every one of our great allies, certain that together we have the power and the will to defend the cause of peace and justice, as we have always done.”

Johnson also called Russian President Vladimir Putin, a “bloodstained aggressor” for launched an unprovoked invasion of the sovereign nation of Ukraine, which would ultimately see him “stand condemned in the eyes of the world and of history…”

The prime minister said he believe Putin was always determined to attack Ukraine, despite the UK and its allies desperately trying “every avenue for diplomacy until the final hour.”

CamPat
British Airline got banned using Russian Airspace. Another good mark in BoJo's Book. Bad for british Expats and Tourists in SEA and beyond. When will Britain kick this loonatic out ?
HiuMak
17 hours ago, Thaiger said: In an address to members of parliament, UK Prime Minister Boris Johnson announced what he is calling “the largest and most severe package of economic sanctions that Russia has ever seen”. The new sanctions target…
Rookiescot
Johnson. If you need someone who can wreck an economy then he's your guy.

Pinetree
Sanctions don't work to effect change, they never have. Examples, South Africa, Burma, North Korea, Iran. They are a sop for politicians to roll out on occasions like this. You meet force with greater force or you don't brother. Read …

Pinetree
8 hours ago, CamPat said: British Airline got banned using Russian Airspace. Another good mark in BoJo's Book. Bad for british Expats and Tourists in SEA and beyond. When will Britain kick this loonatic out ? Since when has BA…