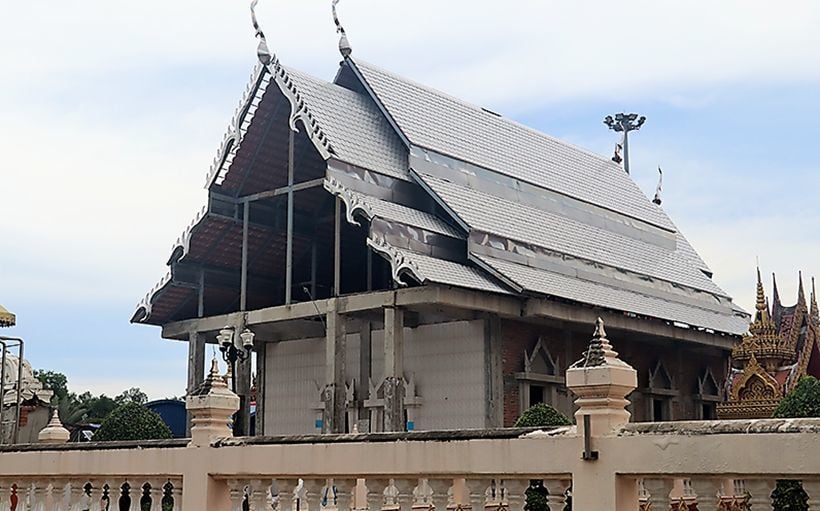 The abbot of a 300 year old temple at the centre of a controversial renovation project has hit back at his critics, saying the work was carried out in accordance with Buddhist beliefs. His comments come after academic Wara Chanmanee lodged a complaint with the Fine Arts Department after Wat Bang Duan Nok was refurbished using cheap floor tiles and topped off with an aluminium roof.

The temple in Samut Prakan, south of Bangkok, dates back to the late Ayutthaya period, and the modern materials used for its renovation, which can be bought from any hardware shop, have caused dismay among historians. However, Phra Kru Kosonpattaporn, is standing by the work, saying if it hadn’t been carried out, the whole structure was at risk of collapse.

“The ordination hall was breaking down, waiting for the day it would collapse. If we didn’t restore it, then the roof, four walls, then Buddha image would collapse, leaving only ruins and the base the Buddha was on. Do you want that?”

He adds that he was encouraged by relatives to repair the temple urgently, given the condition it was in.

“Where were the historical conservationists then? Everyone is cheering me on to quickly finish it. My job is to transform abandoned temples into thriving ones. I’m a conservationist, not a destroyer. If your hand was diseased but you wanted to keep your body, what do you do? Cut off your hand.”

A report in Khaosod English says the project was funded by donations and is yet to be completed. The abbot says the cheap tiles were only used on what is the “outer shell” of the building, and Buddhist thinking dictates that what’s important is the Black Buddha statue inside, which dates from the Ayutthaya period. That, he says, will be preserved, although some smaller black statues of Buddha’s disciples have been removed.

Meanwhile, Wara Chanmanee, who shared photos alongside his fierce criticism of the work on social media, says he holds little hope of the Fine Arts Department doing anything to rectify the situation, after he lodged a formal complaint with the Culture Minister.

“They accepted my complaint as per custom, but they gave the same old excuse that they don’t have the time, funds, or manpower. They can use the same excuse for the next 50, 100 years. I don’t have much hope.”