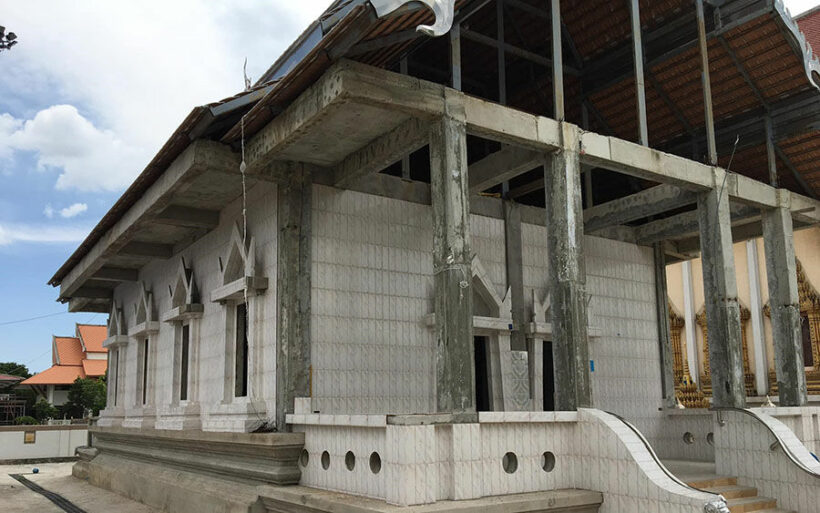 On hearing that an historic Buddhist temple is undergoing renovation, one wouldn’t expect cheap floor tiles from the local hardware store to be used… But academics and netizens are, not surprisingly, up in arms after a restoration project in Samut Prakan, just south of Bangkok, resulted in the 300 year old Wat Bang Duang Nok being refitted with faux-marble floor tiles and an aluminium roof.

Such is the damage, that academic Wara Chanmanee claims the temple has been stripped of its architectural and historical importance, according to a report in Khaosod English. Wara visited the temple on Monday, to find the floors and walls covered in white and faux marble patterned tiles, the carved wooden gable pulled apart, and an aluminium roof fitted.

“It’s such a huge loss. At the very least this temple dated from the late Ayutthaya era. How can you destroy a historical site? It was so beautiful. We all pretend to love historical sites, but when problems happen, everyone says they aren’t responsible. All sense of civilisation is destroyed. The temple is rebuilt with lower standards than a rich person’s bathroom.”

The redecorating controversy comes as a Bangkok university finds itself under fire for its plans to demolish a Chinese shrine in order to build student dorms. It’s the latest in a string of contentious decisions, such as a temple in north-east Thailand being painted pink and orange, and the demolition of a colonial-era trading post in the north of the country. Three weeks ago, an artist came in for sharp criticism after painting a famous comedienne into a Buddhist mural she was working on at a temple in Uthai Thani, northern Thailand.

Wara has taken to social media to voice his dismay at the latest developments, and plans to lodge a formal complaint with the Fine Arts Department regarding the cheap ‘make over’ of Wat Bang Duang Nok.

“Most or almost all of the historical sites in our country are being destroyed. When will it stop? Will we let stupidity, ignorance, or benefits trump the value of historical places?”

It’s understood a previous restoration attempt at the temple in 2018 was stopped by the Fine Arts Department, and a representative says it plans to investigate the matter.

Abbot hits back after criticism of ‘cheap’ temple makeover