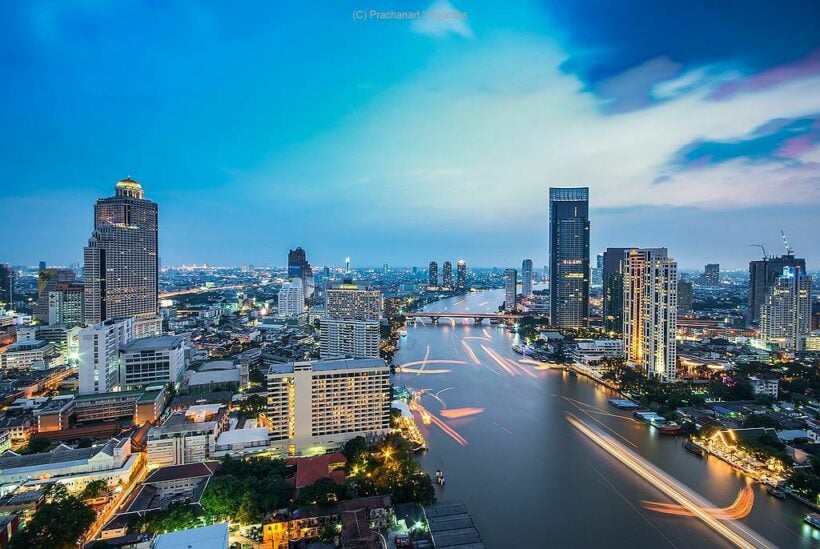 PHOTO: The Chao Phraya River in Bangkok, in calmer times. (via Wikimedia)

While officials have been warning of floods and overflows downstream from dams, in Bangkok, the Chao Phraya River is fortunately still flowing below the embankment levels with no risk of flooding just yet.

The river that runs through Bangkok has not overflowed into any areas along its banks as the water has not yet reached the flood embankment levels as many had feared could happen any time now. But so far, the water levels remain at 1.58 metres below the peak of the embankments.

The Chao Phraya River was measured as flowing at 2,873 cubic metres per second this morning, as reported by Bangkok Governor Aswin Kwanmuang.

To the north in Chai Nat province, water officials have been increasing the rate of discharge from the Chao Phraya Dam to avoid an overflow of rainwater from the north flowing downriver to the dam. Authorities had put out warnings to provinces below the dam that the increase in water allowed through the dam could create overflows and floods, especially along riverbank communities and low lying areas.

In all, 30 provinces were affected by flooding with 17 still in dire condition now. PM Prayut Chan-o-cha has been visiting flood-stricken areas, and Bangkok has been sandbagging and bracing for potential flooding.

Meanwhile, a brave volunteer in Sukhothai has been using his paramotor to deliver supplies to flood victims, while the Ministry of Education was lambasted for posting a fake photo with the Deputy Minister of Education badly photoshopped into old floodwaters.

Police arrest man believed to have shot teenager at protest