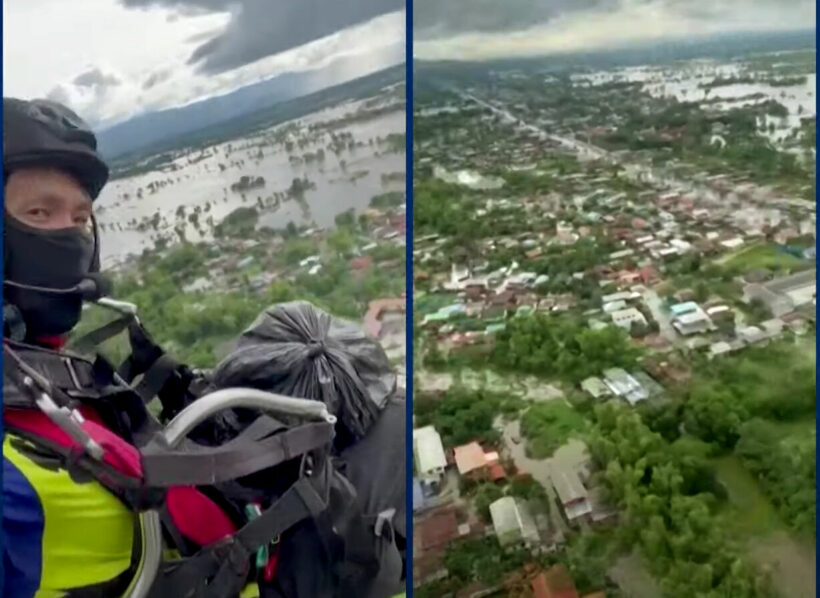 A paramotor – similar to a paraglider with a fan-like propellor on the back – has been soaring above Sukhothai delivering essentials to flood victims in need. Like Santa in his sleigh, 38 year old Vichai Tiyasan glides above the rain drench flood plains swooping down to drop gift care packages to the stranded people below.

The adventurous paramotor pilot has volunteered to do his part to help people in deep floodwaters that are unable to travel and don’t otherwise have access to essentials like dry food and urgent supplies.

The paramotor he flies is also called a powered paraglider and has a metal frame that is back-mounted and fitted with a propeller and a motor, functioning as an ultralight way to propel a single passenger through the air. Brake toggles steer the single person in a fashion similar to a parachutist.

Using his unique skills and aircraft, he can fly in supplies to aid those in need. Videos of his paramotor flights over the mostly underwater landscapes of Sukhothai have gone viral on social media. Large swaths of the central province located about 400 kilometres north of Bangkok has been flooded, far worse than past years Vichai says.

30 provinces were hit with floods in the past week, with only 7 reporting that they have the floodwaters under control. Over 70,000 homes have been damaged and 6 people have been confirmed dead with 2 more missing. Bangkok is now preparing for floods and overflowing along the Chao Phraya River as the flooding that started in the north is intensified by water being released through the Chao Phraya Dam to avoid overflow there is now making its way south through the central provinces and to Bangkok.

While the flooding is bad, it pales in comparison to the floods 10 years ago that left over 500 people dead, industry brought to a standstill, and flooding and damages stretching for months.

Bob20
1 hour ago, Bluesofa said: One day might we see, "foreigner who saved PM's life by administering CPR jailed for impersonating a doctor." Unlikely. 🤣

Bluesofa
1 minute ago, Bob20 said: 1 hour ago, Bluesofa said: One day might we see, "foreigner who saved PM's life by administering CPR jailed for impersonating a doctor." Unlikely. I suppose you're right. I can't imagine anyone wanting to save…

Rain
2 hours ago, gummy said: An excellent individual indeed but just another example how normal Thais are,  rather than the incompetent, arrogant and depraved elite who consider that they are only the ones that matter. And you are right about…

BraveNewFahrenheit
11 hours ago, Griff1315 said: Does the Thai army not have helicopters ?    why on this earth is it left to an individual with a powered paraglider to offer relief to stranded villages. Totally incredible only in Thailand... Over…

NCC1701A
according to this website Thailand's military has 261 helicopters.  https://www.globalfirepower.com/country-military-strength-detail.php?country_id=thailand i am guess they are all being used for spare parts to keep the VIP's copters operational. anyone remember the Thai pilot that posted on facebook all the things that…