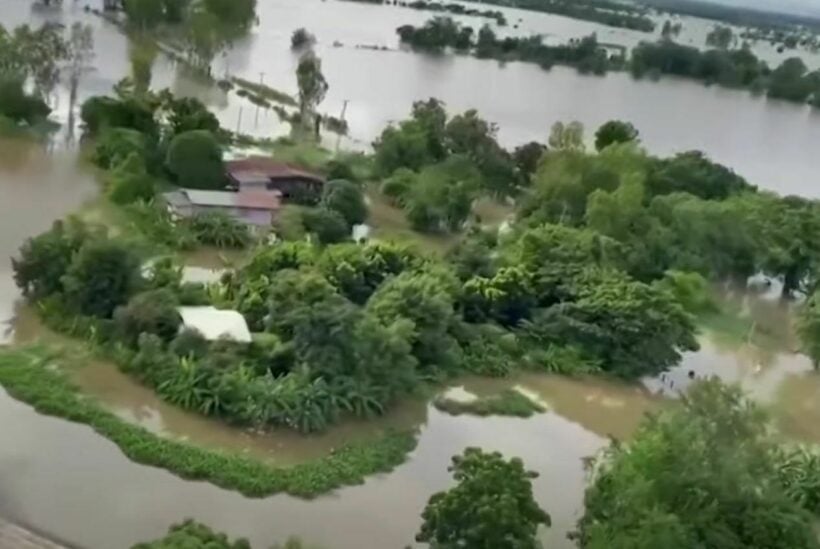 With nearly 70,000 homes now reported flooded across 30 provinces in Thailand, authorities are bracing and preparing Bangkok for flooding. Tropical Storm Dianmu has pounded Thailand with heavy rains and 6 people have been reported to have lost their lives in the widespread flooding across the Northern and Central provinces.

The Thai Disaster Prevention and Mitigation Department reports that the central region has been the worst hit and Bangkok is now facing flooding from runoff water from the north. The Chao Phraya River winds from the north of Thailand nearly 400 kilometres until passing through Bangkok.

A cascading domino effect is occurring: as water levels surge in the north, to prevent the Chao Phraya Dam from overflowing, authorities are increasing the amount of water allowed to pass through the dam. This, in turn, created overflow and flooding issues downstream, and that only adds to the heavy rains pelting central Thailand with more waters, now flowing towards Bangkok.

In Ayutthaya about 65 kilometres north of Bangkok, army personnel are fortifying neighbourhoods as well as archaeological ruins and historic landmarks with sandbags in an attempt to protect from flooding.

The Bangkok Metropolitan Administration says they are preparing for the onslaught of water with sandbags and water pumps while monitoring the Chao Phraya River’s water levels closely. Bangkok Governor Aswin Kwanmuang assured that they would give a warning in advance of any flash flooding.

Authorities have already started sandbagging the most vulnerable areas of Bangkok, with banks and businesses being protected near a canal in Thong Lor, as the area is packed with residential and shopping areas popular with Thai and expats.

Bangkok is just 1.5 metres above sea level, built on former marshlands. Historically, Bangkok avoided floods because the low-lying rice paddies surrounding the city would absorb much of the torrential rains and floodwaters, but years of urban expansion have reduced the water-absorbing areas significantly.

Bangkok has been developing underground tunnels and reservoirs to cope with flooding, but have been reportedly stalled due to problems with land acquisition. They hope the advance preparation now will help avoid flooding like the 2011 monsoon season that saw over 500 deaths and 20% of Bangkok underwater.