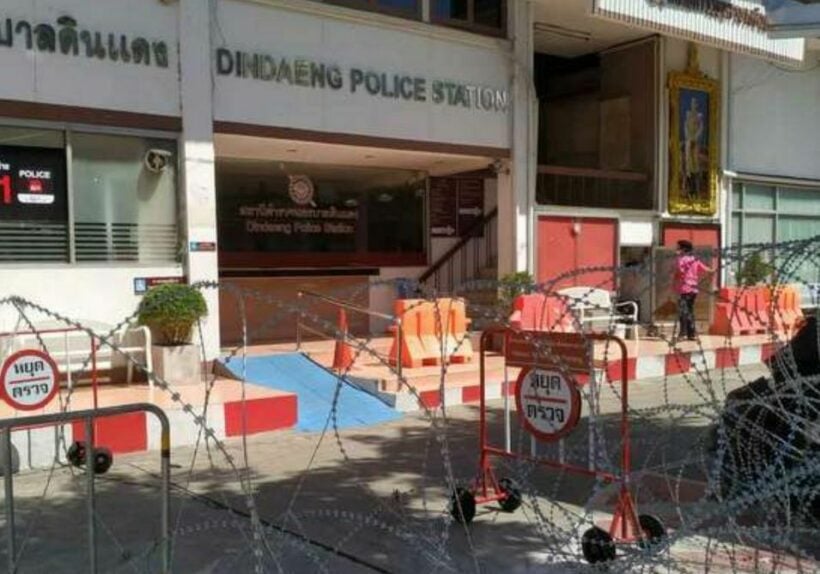 FILE PHOTO: A suspect has been arrested, accused of having shot a teenager at Din Daeng Police Station in August.

In Kanchanaburi province, police have arrested a suspect that they believe may have shot a 15 year old boy during protests in front of the Din Daeng Police Station in August. The shooting caused huge controversy with many accusing the police of using live ammunition and firing into the crowd of protesters.

Police have always maintained that they used only rubber bullets when attempting to disperse anti-government protesters at demonstrations in Bangkok that have intensified in recent weeks. If the man arrested is proven to have fired the nearly fatal shot, the police would be vindicated.

The suspect taken into custody is a 28 year old man police identified only as Chutpoing. The Criminal Court had issued a warrant for his arrest, given to detectives at the Din Daeng Police Station earlier.

The shooting took place on the night of August 16 as anti-government activists protested with increasing volatility. The 15 year old boy was shot in the base of his head and has been in a coma ever since the shooting.

Police had denied claims that they had used live ammunition to shoot at protesters and held a press conference outside the Metropolitan Police Bureau the next day saying only rubber bullets were used to control the crowd. A bullet was found lodged in the 15 year old’s brain stem and the shot caused a fracture in the cervical vertebrae, according to the hospital. The hospital did not originally specify what type of bullet the boy was shot with causing many on social media to accuse police of using real bullets to nearly kill the protester.

The suspect police took into custody today has denied all charges against him. He has been charged with attempted murder and the illegal possession of ammunition and a firearm.

A press conference is scheduled for this afternoon by the Metropolitan Police Bureau to further discuss the case.