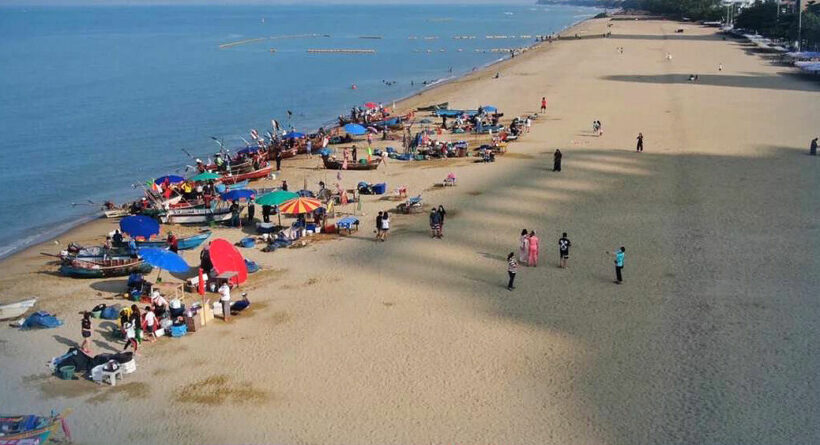 Pattaya, the seaside playground 2 hours south east of Bangkok, never had really good beaches. But these days the popular resort boasts huge expanses of sand as far as the eye can see.

Most of the earlier efforts were concentrated on the popular Pattaya beachfront but recently the efforts moved to Jomtien, about 3 kilometres south of the main party town. Nearly a kilometre of Jomtien Beach is now wider and ‘sandier’ than in the past, attracting beachgoers and their cameras, to the improved beachside resource.

Pattaya City saw many of its earlier efforts and investment washed back into the Gulf of Thailand following monsoonal rains. Back in 2018 a number of rain storms washed away millions of baht worth of sand and reclamation works.

Much of the mostly low-lying beach along Beach Road suffered constant inundation and erosion from storm run-off flowing across troad and then taking some of the new sand out to sea with it. The water was cutting channels into the newly replaced sand areas and wild grass and moss was starting to grow there instead.

But by June 2019 the 8 year work was finally complete. The 600 million baht project sorted back in 2011 amid warnings from environmentalists that the new sandy shoreline could be washed away within five years following its completion.

Despite a few false starts, the makeover on the main beach has not been washed away as yet.

The reconditioning and widening of Jomtien Beach has been measured as a local triumph after drawing thousands of tourists during the Songkran break. The local Marine Department says that social media – posted pics of the new-look Jomtien Beach – has been a powerful drawcard.

The department supervised expansion of 800 metres of Jomtien Beach. Before, like much of Pattaya’s beaches, it was only 5 metres wide. Now the first phase of the beach reclamation stretches 50 metres+ into the Gulf, in line with the Transport Minister Saksayam Chidchob’s policy to prevent beach erosion in the region.

The 586 million baht project will eventually stretch along 3.5 kilometres of Jomtien Beach. The second phase will widen the beach all the way to the Najomtien border as the project is likely to run into next year.

Now the Department has handed the management of the wider, more expansive, first phase of the Jomtien Beach project back to the Na Jomtien Municipality since December 29 last year.

“Refilling of the beach was a huge success because it managed to draw a lot of tourists during the Songkran holidays, allowing tourism operators there to earn good revenue.”

riclag
It certainly is a lovely picture!
vlad
Plenty of room now for the Beach Vendors to dump their waste at the end of the day. There not likely to walk far for a bin.