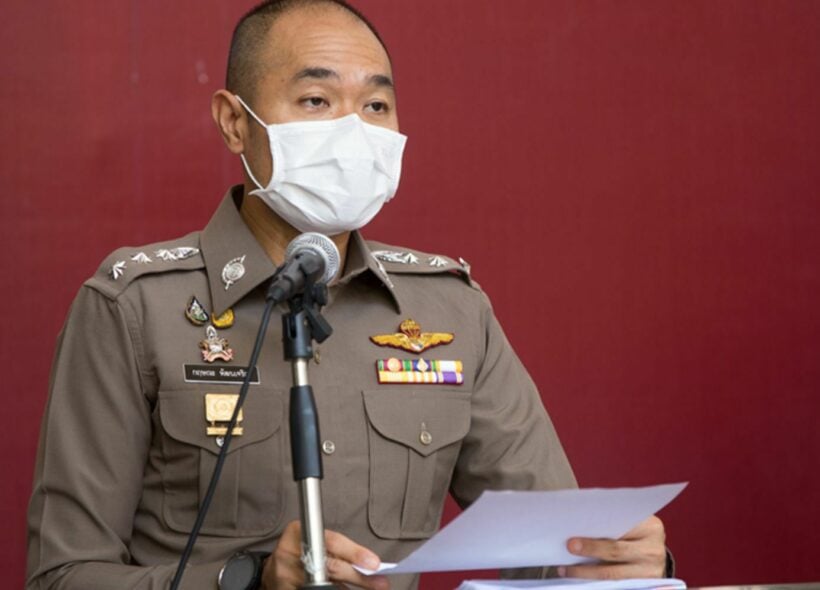 Arrest warrants have been issued for seven police officers who were allegedly involved in the incident where a plastic bag was put over a drug suspect’s head before he was beaten, allegedly by officers demanding a 2 million baht bribe. Reports say the man died from suffocation, but officers wrote the death off as a drug overdose.

As of this morning, a prime suspect in the case, the now-ousted superintendent of Muang station in the northern province Nakhon Sawan, Thitisan Utthanaphon, was still on the run.

Deputy spokesperson for the Royal Thai Police Kissana Phathanacharoen released a statement detailing the charges the officers face. The statement comes after videos of the incident were shared on social media. The spokesperson told the public not to share the surveillance camera footage online as it “impairs the victim’s dignity and affects an ongoing investigation.”

The Nakhon Sawan Provincial Court issued arrest warrants for seven police officers of charges of jointly and wrongfully act or omission to act causing injury to others, jointly for five persons or more coerce someone to act or not to act, and jointly murder by torture.

As of this morning, five of the suspects were detained while the other two were at large. Commissioner general of the Royal Thai Police, Suwat Jangyodsuk, set up a team of detectives and officers to work on the case. The spokesperson added that Suwat has ordered officers to do everything in their fullest capacity to arrest the two officers on the run.

The National Anti-Corruption Commission has stepped in to investigate Thitisan Utthanaphon’s unusual wealth, the commission’s spokesperson, Niwatchai Kasemmongkol, said yesterday. Officers raided a luxury home in Bangkok owned by the 39 year old ex-cop and seized 29 luxury and supercars, according to the Bangkok Post.

While the police superintendent is accused of taking bribes, a source told the Bangkok Post that the officer has earned money through the edible bird’s nest trade and later started to earn money through rewards by uppressing the smuggling of luxury cars and supercars in the South.

gordo2613
3 of them including the Ferrari king have skipped over to Laos, everyone knows, what else would you you expect, give themselves up and say "yes m'lud" guilty as charged, 555
Buttaxe
"The spokesperson told the public not to share the surveillance camera footage online as it “impairs the victim’s dignity and affects an ongoing investigation.” Kinda impairs the RTP's 'dignity' too wouldn't ya say spokesperson. And affects the ongoing investigation in…

Red Cross pleads for blood donations due to shortage