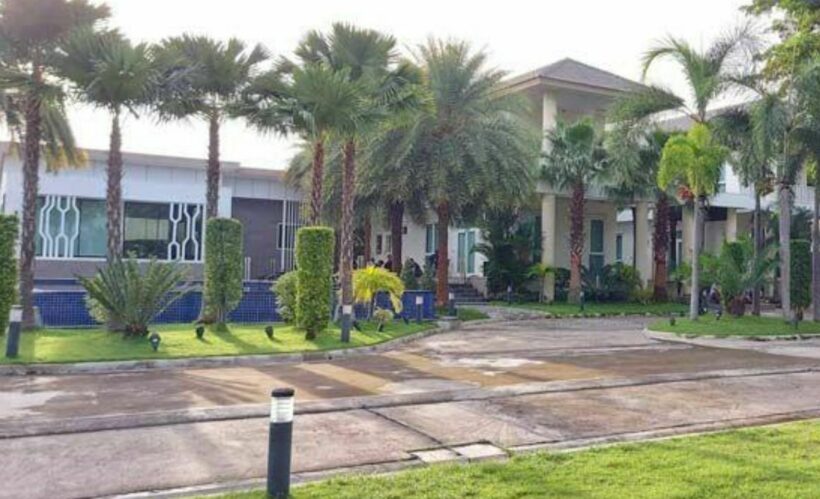 The appalling story of the Mueng Nakhon Sawan Police suffocating a man to death while trying to extort him for 2 million baht continues with more and more shocking turns. Now details are emerging of the accused police station superintendent Pol Col Thitisan Utthanaphon’s luxury house on a large plot of land in Bangkok with 13 high-end cars.

First, the superintendent was transferred to another precinct until video of the murder was posted online and immediately went viral. Today the Thai court issued warrants for the arrest of 7 of the police officers, including the superintendent, 4 of whom are in custody already.

But Thitisan, known as “Chief Joe”, has not been taken into custody. Warnings went out to immigration police and border checkpoints to fear that he would flee the country. And now, when officials went to his house to try to locate the wanted police officer, the public was shocked to hear about his luxurious lifestyle, his mansion, and his collection of expensive cars.

The Royal Thai Police’s investigative team visited Chief Joe’s 2-acre compound in Bangkok today in the Khlong Sam Wa district but he was not there. There were two Burmese housekeepers and a security guard home when investigators arrived. They were questioned but said they knew nothing about Chief Joe’s whereabouts and have had no contact with him.

The grounds were thoroughly searched, giving people a glimpse into his sprawling land that includes a large football field and a sizable swimming pool. Among the grounds, police counted 13 luxury cars and supercars parked there, apparently owned by Chief Joe. The cars, including a Lamborghini and a Ferrari, are valued at more than 100 million baht in total.

Many are now questioning how the police station superintendent has afforded such a lavish lifestyle with a massive compound, luxurious house, and fleet of very expensive cars.

Stardust
10 hours ago, Thaiger said: The appalling story of the Mueng Nakhon Sawan Police suffocating a man to death while trying to extort him for 2 million baht continues with more and more shocking turns. Now details are emerging of…

Bluesofa
(from the Thai PBS World link above) "The Inspector General said incident is an “evil conduct. It is very serious. The police chief has instructed me to cut off all the cancerous fingers, immediately,” as police vowed to hunt down…
vlad
7 hours ago, colinneil said: Laughable, thats what it is, Thai police are looking for him, ha, ha. If they try as hard to find him, as they did to find Red bull heir, he will never be found. Also…
PlanB
He should be condemned not only for distortion and murder, but also for "Liese Majesty", because he was acting as a Thai Royal Police officer.

King Cotton
8 minutes ago, PlanB said: He should be condemned not only for distortion and murder, but also for "Liese Majesty", because he was acting as a Thai Royal Police officer. Too true, but I guess that was the farthest thing…