Thailand has announced 6 new cases of Covid-19 today, with only one person showing symptoms, according to the CCSA.  2 Thais and 4 foreigners make up the positive diagnoses, raising the total number of cases confirmed in the kingdom to 3,634.

The 1st case was a 57 year old Japanese employee from his home country who arrived on September 26 with a “cough and headache”.  He tested positive on his 2nd test and was in an alternative state quarantine facility in Bangkok.

The 2nd case was a 32 year old Thai woman from the UK who was asymptomatic but tested positive on Thursday while in an ASQ facility in Bangkok. 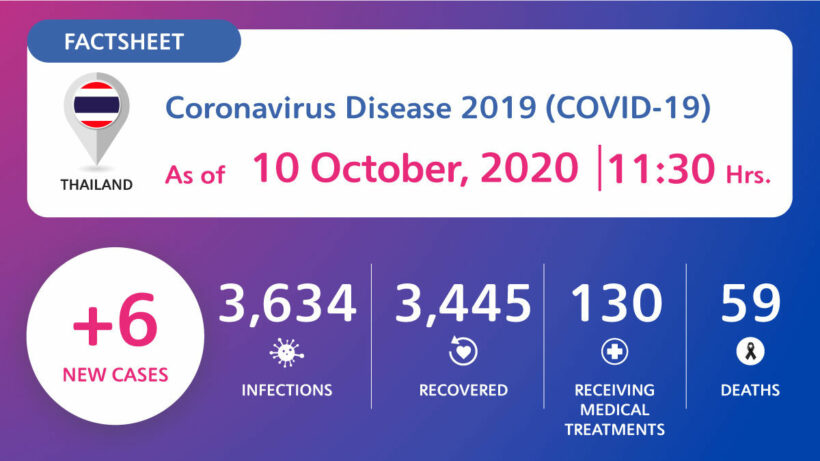 The other Indian patient was a 36 year old man who had a history of being infected with the virus back in August. He arrived on September 25 and later tested positive after 2 negatives tests. He was also reportedly asymptomatic.

Of the total 3,634 cases in Thailand, 3,445 have recovered with 130 patients still remaining under treatment in hospitals.  The death toll has remain unchanged at 59.

Globally, the number of confirmed cases has reached 37.1 million while the death toll has reached 1.07 million. The US has the most cases at 7.9 million with India coming second with 6.97 million cases, quickly closing in on the US totals.  Thailand currently ranks 136th worldwide for the amount of confirmed Covid-19 cases.

Here’s the top 10 number of new Covid-19 cases reported in the past 24 hours.