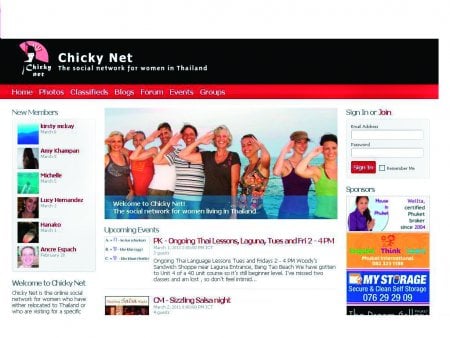 PHUKET: WHAT started out from a Phuket expat wanting to expand her social circle has grown into a commercial network of its own, connecting 1,400 women all over Thailand – in just two years.

Chicky Net was launched in 2009 when Berthe Mandaat, 34, originally of the Netherlands, relocated to Phuket.

The website started off as an online group for Phuket women on the hugely popular Facebook, but has since grown into a Thai social networking force of its own.

Berthe, whose professional background is in graphic design, quickly found that the Facebook format could not accommodate the number of women who were interested. So she founded Chicky Net as a forum for discussion, event organizing and simply meeting friends.

The website experienced unprecedented growth. In addition to the website’s stronghold, Phuket, which has a total of 840 members, new network sites were established in Chiang Mai, Bangkok, Koh Samui and Hua Hin.

“Since November, we decided to combine the five city networks under the same virtual roof, since having five different networks was time consuming for me and inconvenient for people who wanted to be members of more than one,” Berthe explains.

With at least 10 new members a week, the site now receives 9,000 visits a month.

“Advertising interest has been high due to the possibility of targeting the niche market of women who live in Thailand, women who spend their money here, and 75 per cent of whom have partners and families who are also indirectly reached,” Berthe says.

“But I never set up the site for it to become a business. I just wanted to expand my social circle,” she adds.

Berthe says the success of the website has not really been down to a particular business model, it is more because of the demand for such a service.

“As soon as I started it you could see there was such a big need for it. As word got out that there was finally a resource for women to connect, the site grew and spread like a domino effect throughout Thailand,” she says.

The members on Chicky Net are all women, about 85 per cent of whom are foreigners. Berthe’s next steps are to try to attract more Thai women into the site, and to expand to other cities such as Pattaya.

“I am very happy with the success because one of the main reasons the site was formed was to show women they are not alone, and that there are many women sharing similar interests and questions, and simply looking to make new friends,” she says.

Bypass Bali, go for the Gilis