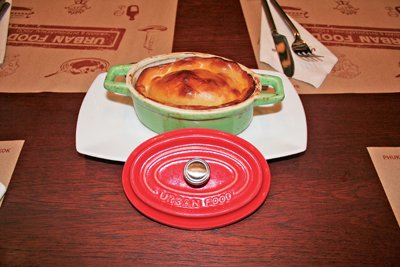 A few steps further on at the southern-facing entrance stands Urban Food, a stylish and modern yet quaint 110-seat al-fresco and air-conditioned self-styled bistro that serves up mainly Mediterranean-style dishes, along with a good smattering of Thai/Asian cuisine.

It’s spanking new and already a fave-rave venue for people looking for a cut-above-the-rest lunch as well as hungry shoppers with a penchant for something other than the nearby Golden Arches and finger lickin’ food, and definitely a better health option when it comes to mall dining in Phuket.

Décor wise, the place is easy on the eye with white faux-chalk signage on black paneling, clever lighting and a spacious feel to it.

Now, generally speaking, photo menus are not exactly portents of haute cuisine, but in Urban’s situation and location it’s almost mandatory to use them and the restaurant cunningly makes the most out of the opportunity by using an attractive, colorful and easy-to-read layout.

Basically, if ordering steak, you can point to the four ‘tenderness illustrations’ that feature rare, medium rare, medium and well done. The same applies for the chili factor in the Asian dishes featured. It’s practical, logical and, er… well done.

The Urban group is managed by French-born Frederic Garnier from Cannes. He tells me that at present there are two branches in Patong with one more due to open in Bangkok this spring, (does that make them urbanites?), then goes on to explain that the veggies are shipped in from Phang Nga Province and that most of the restaurant’s red meats are from Australia and New Zealand. With Thailand’s current flood-related food supply problems, this is good news, indeed.

The 44-label wine list is surprisingly easy on the wallet and we choose a red Marius Shiraz Grenache (780 baht) that goes down well with a four-cheese pizza (220 baht), a chicken and mushroom pie (230 baht) and a rather spectacular mixed grill on a wicked-looking skewer that conjures up lurid images of Vlad the Impaler; much to the delight of our carnivorous cameraman.

The pizza crust is excellent, as is the topping, but the chicken and mushroom pie pastry crust was more than I could handle so I removed it and ate straight out of the casserole. It was delicious. The mixed grill was a meat lover’s dream and was beautifully presented, as was the juicy accompanying vegetable dish.

A meal at Urban is quite a feast and everyone enjoyed it, including little three-year-old Beng who tucked into a khao phad goong (120 baht) and an orange juice.

Mention must be made of the heroically named Wanchai One-Eye (no kidding, or at least that’s how he pronounced his name) whose English and waiting skills are really quite outstanding. And it’s comforting to note that, on closer examination, our waiter is not a Cyclops.

Make no mistake; this is feel-good comfort food at its zenith. It’s there for a reason called ‘mall hunger’. Urbane it ain’t, but it is definitely Urban. Check it out for its fresh salad bar and wide-ranging menu.