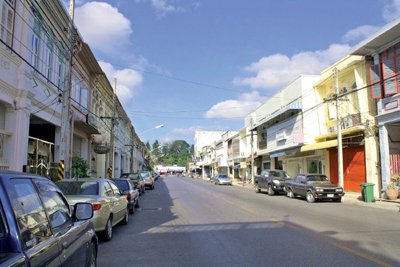 PHUKET: Thalang Road has always been the pride of old Phuket Town because of its interesting history.

Both sides of the narrow road, lined with old Sino-Portuguese shop-houses showcase the town’s unique architecture and cultural heritage.

Thalang Road was one of the first roads in Phuket Town to be renovated when Phraya Ratsada-Nupradit (Kor Sim Bee) took charge as Phuket’s High Commissioner. The prominent high commissioner of Phuket was a good friend of King Chulalongkorn (Rama V) and was personally assigned by his majesty to develop the town.

Kor Sim Bee took office in Phuket in the year 1901. His first development project was to repave Thalang Road with gravel, making the surface more even and smooth for transport. He then encouraged traders and miners to demolish the mud buildings that previously aligned the old road, replacing them with well constructed brick buildings and shop-houses in Sino-Portuguese architecture. The rows of shop-houses were typically connected to each other, with a sheltered walkway built in front of the shops to shield pedestrians from the rain and sun.

After the improvement of Thalang Road, Kor Sim Bee also renovated several other roads in Phuket Town and also built new ones. One of his last projects was the renovation of Dibuk Road, which runs parallel to Thalang Road. This particular project increased the length of Dibuk Road, connecting it with Satun Road on its west end and intersecting Yaowarat Road, continuing east. Although its official name is Dibuk Road (Dibuk means tin), town locals often referred to it as ‘Sinlor Road’, meaning new road.

Although most of the roads built during Kor Sim Bee’s time were designed to accommodate horse-drawn carts, it was a time when the country’s first motorcars were already being imported into Bangkok. Several members of the Thai royal family had grown to become motorcar enthusiasts and many of the country’s rich and upper class wanted to follow in this new found trend. Kor Sim Bee knew that it would only be a matter of decades before Phuket’s roads would have to accommodate such vehicles.

To prevent future congestion, Kor Sim Bee mandated that new roads in Phuket Town had to be built wider than usual. As such, one of the main criteria used was that the new roads must be wide enough to comfortably accommodate ten horse-drawn carts. Some of the older roads however, like Thalang Road, older sections of Dibuk Road and Soi Romanee, were much narrower in comparison. Widening these roads would require the demolition of existing buildings and would cause a lot of trouble for residents. Kor Sim Bee therefore concentrated his road building projects around the lesser populated areas of Phuket Town.

An interesting story emerged from this period. According to the town plan, the new section of Dibuk Road, from the Yaowarat intersection to Satun Road, was meant to cut through an orchard that belonged to a Chinese man named Pae Lao Nua. Kor Sim Bee asked Lao Nua to let him build the new road through his orchard. Lao Nua, believing that the new road would increase the value of his land, agreed to let the construction go ahead. However as the new public road began to take shape on his land, Lao Nua became discontent with the width of the road, which was around 15 meters wide. He protested with Kor Sim Bee, but by then the construction had gone too far ahead

and Kor Sim Bee refused to change his plans.

As expected, the value of the land around the new Dibuk Road rose rapidly as soon as the road was opened to the public. People were offering to buy land on both sides of the lane leading to Lao Nua’s house, in order to build shop-houses and other properties. Lao Nua himself built several new shop-houses along this lane and rented them out. The rental income made him quite rich so to thank the town government, he donated the lane to the municipality. The lane was named in his honor as ‘Lao Nua Lane’.

One of the ways that Lao Nua made his money was by being a guarantor for someone who got into trouble with the law. He would go to the police station and court house to guarantee those he thought worthy, so that they could be released on bail. But as he gained more customers, a larger number of them also fled. He lost quite a lot of money in this way.

As a result Lao Nua had to sell much of his land along the new Dibuk Road to cover his debts. Much of the land he sold went to prominent Phuket families, like the Tantiwit family, who built one of Phuket’s most magnificent Sino-Portuguese mansions on land that used to be Lao Nua’s orchard.

Today the mansion has been restored to its former glory and is being used by the Blue Elephant Cooking School.