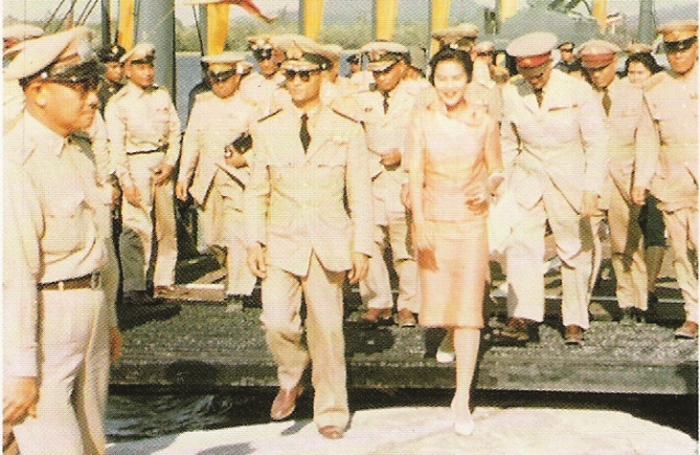 PHUKET: Phuket was graced by four visits of His Majesty King Bhumibol Adulyadej during his 70-year reign; the first was 57 years ago, on Sunday, March 8, 1959, accompanied by Queen Sirikit.

The royal couple took a car ferry across the Pak Pra channel from Phang Nga to Phuket, arriving at Tah Chat Chai at 4pm, where they rested for about 15 minutes before heading into Phuket Town by car. Then Phuket Governor Uan Surakul hosted the royals at the Governor’s Residence that night.

On the following Monday, the King and Queen made a public appearance at Phuket Provincial Hall, before heading to Wat Phra Nang Sang School and Surin Beach.

On the third day of their Phuket visit, the King and his consort went to Rawai pier to make merit by releasing spiny lobsters into the sea. There, the King met with Rawai residents, including local sea gypsies, to observe and learn about their way of life. The gypsies demonstrated to the King their fishing techniques and how they maintained their boats. They also put on traditional dances and presented hand-crafted souvenirs to their majesties.

On the fourth day of their first trip to Phuket, the royal couple went to Patong and spent time at Wang Kee Aon waterfall, where His Majesty graciously accepted refreshments from locals.

That afternoon, the royal entourage visited Wat Mongkol Nimit in Phuket Town, where a golden Buddha image from the Sukhothai era resides, and then made their way to Wat Phra Thong in Thalang before meeting locals from Pa Khlok and visiting the mangrove forest at Tha La Beach.

On March 12, five days after arriving on the island, the King and Queen left for Phang Nga.

Eight years on from his first visit to Phuket, King Bhumibol returned to the province on May 23, 1967, to preside over the inauguration ceremony of the Heroines’ Monument, dedicated to the memory of Phuket’s female war heroes – Thao Thepkrasattri and Thao Srisoonthorn.

His Majesty also led a blessing ceremony at Wat Charoen Samanakij, behind Phuket Provincial Court, and then presided over the opening ceremony of Vachira Phuket Hospital’s new blood bank, the Lert Phokarak Building.

Two years later, on July 23, 1968, King Bhumibol and HRH Crown Prince Maha Vajiralongkorn donated to the province a Buddha image (Phra Buddha Nawarajabopit). The holy image was installed at Phuket Provincial Hall – one of a collection ordered by HM King Bhumibol for each province in the country.

That afternoon, the King visited local tin mining operation Thaisarco Co Ltd, and then went to Patong Beach to inaugurate the Ratchapathanuson Monument; marking the spot where the King and Queen first set foot on the beach in 1959.

The King and the Crown Prince left the island the next day, departing from Surakul Stadium in a helicopter to Phuket Airport where they took a military plane to Surat Thani, and from there took a private jet back to Bangkok.

The King’s fourth and final visit to Phuket was on April 16, 1973. He was accompanied by HM Queen Sirikit, HRH Princess Maha Chakri Sirindhorn and HRH Princess Chulabhorn Walailak.

The royal entourage met with provincial officials and locals and conducted a merit-making ceremony at the Heroines’ Monument.

After a brief visit to Thaisarco again, the royals sailed to Naka Noi Island, where they donated clothes and other goods to the island’s elderly.

To this day, Phuket remains a favored destination for the royals and His Majesty’s visits will forever be fondly remembered in the hearts and minds of Phuketians.

On Deck: Sailing ignored as a mainstream sport