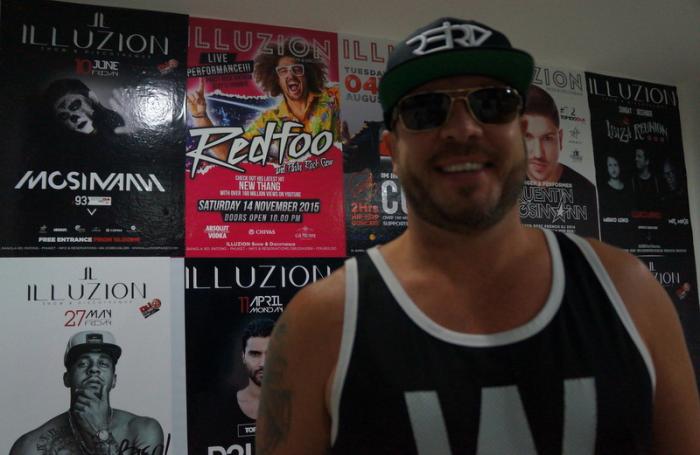 PHUKET: Jeff Retro, a DJ from a top night club in Las Vegas, performed for thousands of guests at Illuzion night club in Patong on July 9.

Jeff has been a DJ for about 15 years now. He was born in Ohio and comes from a musical background. He was raised by a single mother who majored in music in college and worked as a music and choir director. His father was a music major as well and still plays with a small band in Ohio.

Jeff did not want to have anything to do with music when he was younger, but was rather more interested in sports. He played football, basketball and baseball. Music was still a part of his life, but he was undecided about what he wanted to do professionally.

After changing his major four times in college, his mother insisted that he choose a field and stick to it, so he settled on and graduated with a degree in communication.

After graduating from college, Jeff started working in real estate and was self-employed for several years. He also worked part time at a radio station, but not with the intention of pursuing music as a career.

When he started out, he made about six dollars an hour as a part time DJ. He says it was a laughable amount and he certainly didn’t do it for the money. At one point, he was even working as a full time DJ, but then he would always go back to working in real estate, he said.

However, his life took a major turn in 2008, when the financial crisis was in full swing.

Jeff says he lost a lot of money and property in the economic crash, at which point he decided to re-evaluate his life and his priorities.

Following his heart and his true calling, Jeff decided to become a full-time DJ. He packed up all his belongings and moved from Florida to Nevada.

Without any real idea of what he was doing, he followed his instincts, which told him that he was on to something great. He confesses that he didn’t know a single person when he left home and wasn’t sure how it would all work out, but he kept going just the same.

Jeff began playing gigs at restaurants, which was a far cry from the posh nightclubs he now plays at. However, he paid his dues, he says, and took on any jobs he could get his hands on.

Going on in a similar fashion for almost six years in Vegas, Jeff had actually decided to call it quits and move back home at one point. He even called and told his mother that he had failed and would be returning home.

However, an unexpected gig came up about that time, which turned his life around. The Hakkasan Group invited him to open for their new night club. It wasn’t even a paid gig, but he took it anyway.

However, this opportunity soon led to others and things started going uphill from there, Jeff says.
He attributes his success to his humility, and says he certainly does not consider himself a rock star.

He is a true music lover and hordes of Phuket residents and tourists were well entertained by his sophisticated beats.