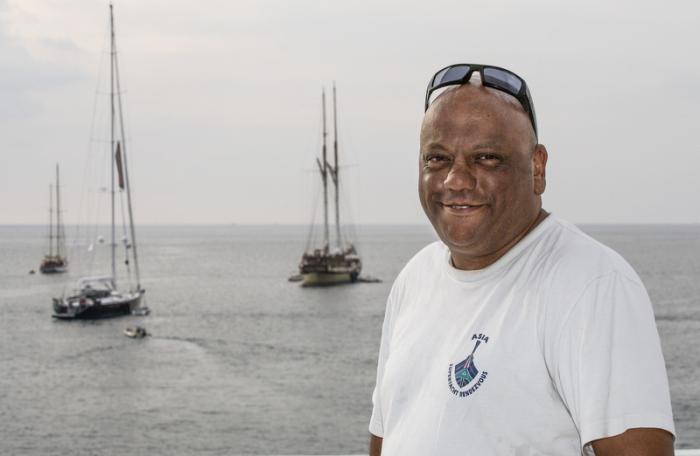 PHUKET: Gordon Fernandes, one of the best-known super-yacht professionals in Phuket, is the general manager of Asia Pacific Superyachts for Phuket and Myanmar. He is also the co-founder and organizer, along with Captain Charlie Dwyer, of the annual Asia Superyacht Rendezvous (ASR), which is this year celebrating its 16th event in Phuket.

Having worked in Thailand for many years, Gordon’s can-do attitude has helped him in his career and is reflected in his unstressed demeanor when welcoming and taking care of arriving superyachts from around the globe.

He arrived at his current position and passion in a roundabout way. After completing his university degree in 1995 from Leicester, he moved into the computer industry (with a small company called ‘Apple’). After a few years, however, the lure of travelling was too great and he headed off for an action-packed trip around the world.

Gordon had a strong desire to learn about Thailand, thus his next stop was the (then developing) island of Phuket in 1997. After working as a Dive Master, he became a partner in an agency working with superyachts in Phuket, but continued following his yearning to broaden his horizons, soon setting forth for Australia.

After working and travelling in Australia, he returned to work again with superyachts in Phuket, and this time he stayed. Gordon soon progressed in his work and became one of the founders and an active working partner of the highly successful Asia Pacific Superyachts Company and its network of superyacht agencies. APS is now recognized worldwide as the leading superyacht agency in Asia Pacific, with 17 agencies or branches in 15 countries.

A strong proponent of Phuket increasing its resident and visiting inventory of superyachts, Gordon and Charlie have worked enthusiastically and devotedly with the Asia Superyacht Rendezvous since 2000, making ASR a prestigious annual global gathering of both sail and motor superyachts, attracting many of the world’s most elite superyachts over the years.

“There are quite a few marinas in Phuket which can service bigger boats. The cruising areas, coupled with the lifestyle of Phuket, makes life interesting for people,” Gordon told Gazette Radio in an exclusive interview last week.

Gordon views Phuket as close to being the ‘Superyacht Monaco of the East’. He supports and works closely with the Thai government and Thai labor forces. He believes Thailand’s ‘Mai Pen Rai’ and ‘Sabai Sabai’ mentality help make Thais highly desirable as yacht crew, stating that “they do not get visibly stressed or show their emotions”.

“On the evening of the 16th, we have a very exclusive cocktail party on a superyacht called Dunia Baru, a wooden Indonesian phinsi-style vessel with a massive deck area where we’ll be entertaining guests at an invitation only event. On the 17th, we have the Benetti challenge where teams of three have to make their own little yachts, which they have to blow down a course,” Gordon said.

“This is the first year we’re hosting a cup. For those who want to do hard and fast racing, we have a handicap system and a cup will be presented to the winner at the gala dinner on the 18th, whereas pleasure sailors can come along and enjoy sailing as well.”