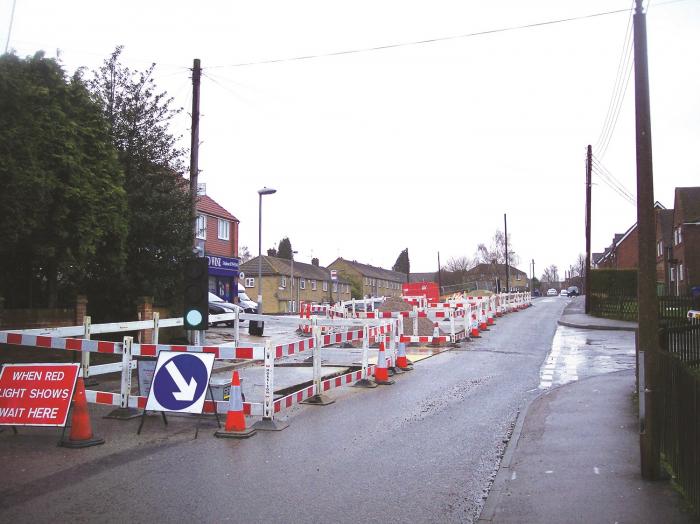 PHUKET: Travelling in my car along Thepkrasattri Road at dusk from Thalang the other day, I hit a strip of the three-lane highway that was being resurfaced.

The roadwork crew had enough forethought to put a grimy 40km/hr speed limit sign on the median strip, just before motorists hit the edge of the freshly gouged surface, as well as a handful of traffic cones separating the left hand lane. Apart from that, there was nothing to help guide them on the dangerously uneven, dimly-lit patch of partially-dug road.

What’s worse, the traffic cones were black in color – making them almost invisible – and meter-long metal poles with flat ends were used as lane dividers.

I drove past several of the cones and poles, lying strewn about the road, after they had presumably been knocked out of place by passing motorbikes and cars.

The roadworks vehicles were parked in a nearby U-turn bay but there wasn’t a hi-vis-jacketed workman in sight.

It appeared that they had simply downed tools, packed up and gone home when it got dark without a thought for the dangerous situation they had left behind.

If billions of baht are to be spent building roads to ‘international standards’, can part of the budget be used to train road workers and ensure they have a good supply of reflective cones, signs and barricades so that drivers won’t have to suddenly take evasive action to avoid a piece of metal left lying in the middle of the road?

In fact a familiarity trip for officers in the Highways Department to see how it’s done in other countries would be money well spent.

In the UK, roadworks are a semi-permanent fixture on the country’s highways and byways – to the extent where it can feel a bit excessive – but you always get plenty of warning to slow down and get into lane, well ahead of the roadworks themselves.

Sometimes it’s overkill, but it’s better than risking actual road kill – an all too familiar and depressing sight in Phuket which could so easily be fixed with a bit of forethought.