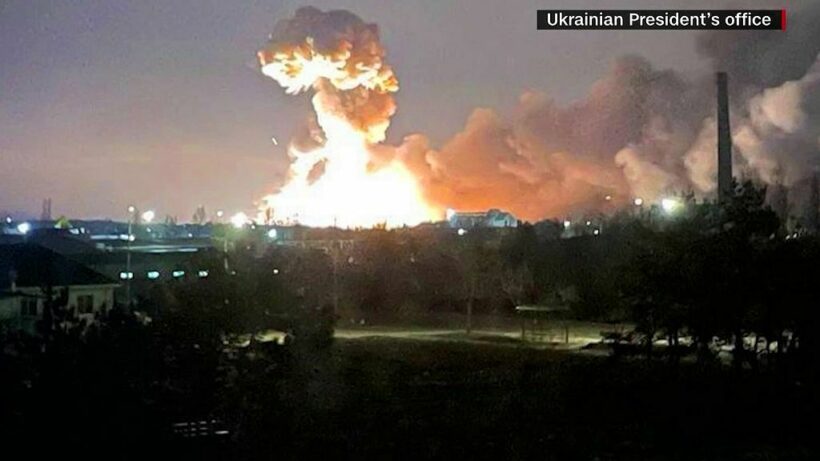 But Russia claims it has met weak resistance, with Ukrainian border guards reportedly surrendering, as the two countries further engage in an information war to control the narrative.

Russian state media has also broadcast interviews with pro-Russian residents supposedly in the Donbas regions who expressed elation at the liberation from “the regime in Kyiv.”

Meanwhile, the Ukrainian military says it has shot down at least six Russian aircraft and killed around 50 Russian “occupiers.”

So far independent news agencies have been unable to verify many of the claims from either side, as conflict escalates across the country.

However, BBC has verified at least one missile attack on a Ukrainian airport, confirming Russia’s plan to target military infrastructure.

The Ukrainian government earlier closed civil airspace throughout the country and declared martial law. They have reportedly offered weapons to civilians, after earlier calling on veterans to take up arms.

Earlier, UK PM Boris Johnson decried the attacks in a televised address to the nation.

“A vast invasion is under way by land by air and by sea.”

He said our worst fears have come true and that, tragically, all the predictions and warnings of imminent Russian invasion were accurate.

“We cannot allow that freedom to be snuffed out. We cannot and will not look away.”

Leaders in the UK, the EU and other Western allies are meeting today to discuss enforcing a new package of harsher sanctions to reprimand Russia.

They have not yet shown the intention of sending troops, beyond defending their own borders from any overflow of Russian aggression. 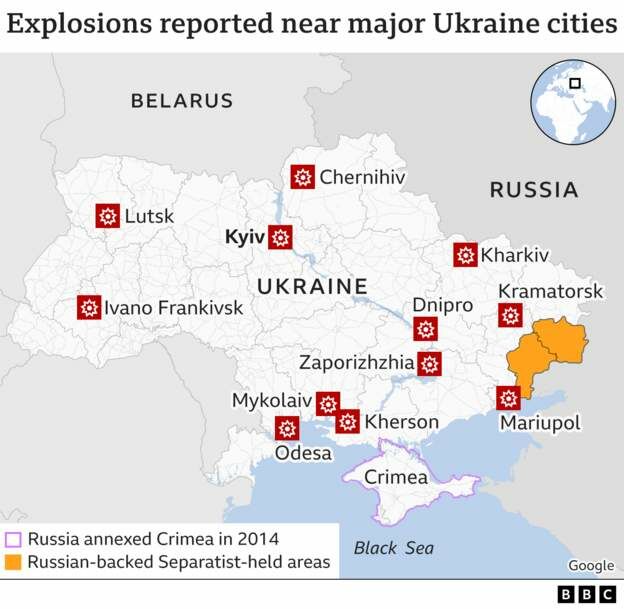 A spokesperson for the Ukrainian President has announced that more than 40 Ukrainian soldiers have been killed since the Russian invasion began, “and a few dozen injured”.

Oleksiy Arestovych, an adviser in the President’s Office, said that in addition to the military casualties, “as far as I know, at the moment there are a few civilian deaths… up to ten.”

Meanwhile, NATO allies are lining up stress the harshness of sanctions that are about to descend on Russia.

“We will freeze Russian assets in the European Union and stop the access of Russian banks to European financial markets.”

“We will present massive and strategic sanctions against Russia for approval later today”.

“These sanctions are designed to take a heavy toll on the Kremlin’s interests and their ability to finance war.”

In the early phases of the incrursion, Ukraine armed forces claim that a “sixth Russian plane has been shot down, “this time in the Kramatorsk area” (in the centre of southern Ukraine).

Earlier today Ukrainian military forces claim they had shot down 5 aircraft and a helicopter as the Russian forces attacked.

The Russian military have denied the claims, according to state news agency TASS. 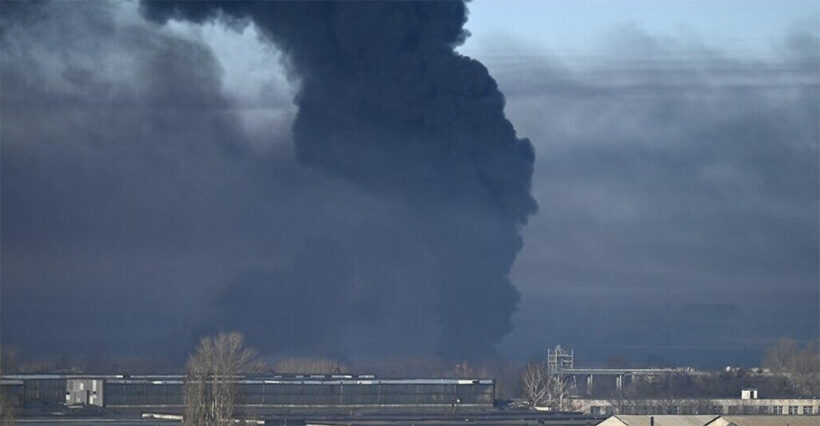 Russian military forces have officially launched a major assault on Ukraine with reports of explosions in major cities across the country. The attacks began at 5am local time (10am Thai time) on Thursday. At least eight people are reported to have been killed at this early stage of the invasion.

Already there are long traffic jams Kyiv residents try to get out of town. Reporters in Kyiv say that the scale of the invasion has taken them by surprise. Martial law has been declared around the country.

President Vladimir Putin announced the operation early Thursday morning, warning of an ‘instant’ response from Moscow to anyone who tries to confront Russia. He is urging Ukrainian soldiers in eastern Ukraine to “put down their weapons and return home”.

In response, Ukraine’s Foreign Ministry has condemned Russia’s military advance as an “act of war”. Spokesperson Oleg Nikolenko wrote in statement on Facebook…

“This is an act of war, an attack on sovereignty and territorial integrity of Ukraine, a gross violation of the UN Statute and the fundamental norms and principles of international law.”

Minutes after Putin’s speech, there were reports of explosions in the capital of Kyiv. Local residents have been trying to flee the city by car, causing major congestion on the roads, or hunkering down wherever they can find shelter. Many have fled to underground metro stations.

Although most of the air strikes concentrated on the eastern parts of Ukraine, strikes were also reported in the west, in Lutsk and Ivano-Frankivsk.

CNN is reporting that blasts were heard from several parts of Ukraine, including near Kyiv and the city of Odessa in the south of the country. Images (above) released by the office of President Zelensky show large explosions in the east of Kyiv.

In the address, broadcast live on Russian national television, President Putin urged Ukrainian defence forces to “lay down their arms and go home”.

“All responsibility for possible bloodshed will be entirely on the conscience of the Ukrainian government.”

“Our plans are not to occupy Ukraine, we do not plan to impose ourselves on anyone.” 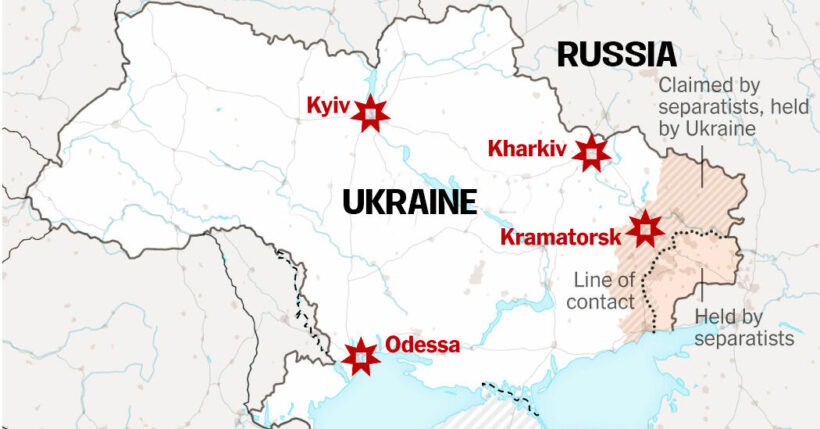 The US Embassy in Kyiv is warning Americans in Ukraine to “shelter in place” in a number of major Ukrainian cities. Meanwhile, the Chinese embassy in Ukraine has issued a warning for Chinese citizens urging them to display a Chinese flag on their vehicles for safety.

“The situation in Ukraine has deteriorated dramatically. There have been bombings in multiple cities, and the military operations are under way…”

It ordered its citizens to stay at home, away from windows or glass, and avoid any “serious riots” that are happening on the streets.

Ukraine’s foreign minister accuses Russia of initiating a full-scale war and urges the UN “to do everything possible” to stop it. Ukraine’s President Volodymyr Zelensky has said that an invasion “could be the beginning of a big war on the European continent.”

US President Joe Biden predicts a major loss of life and vows that the world will hold Russia accountable. Biden is set to address Americans tomorrow about the consequences Russia will face.

“President Putin has chosen a premeditated war that will bring a catastrophic loss of life and human suffering. Russia alone is responsible for the death and destruction this attack will bring, and the United States and its Allies and partners will respond in a united and decisive way. The world will hold Russia accountable.”

NATO chief Jens Stoltenberg says the group of nations stands with Ukraine at this time of crisis, and will do whatever it takes to defend its allies.

Oil prices have jumped to more than US$100 a barrel for the first time in 7 years, and the Russian rouble has plunged to an all-time low against the USD and Euro. 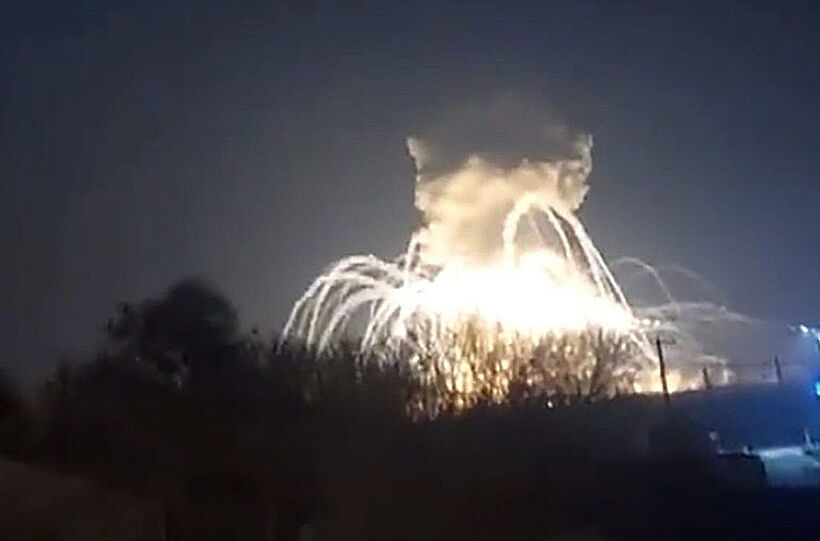 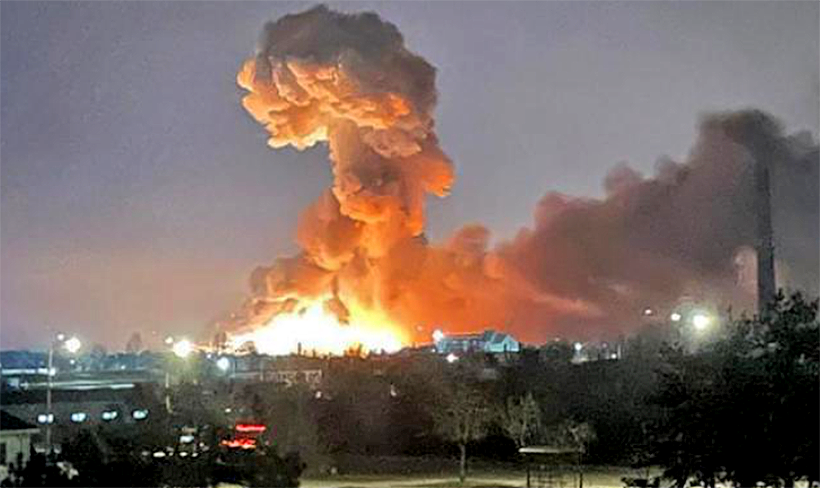 An explosion is seen in Kyiv as Russian military forces launch a major assault on Ukraine today.

Noble_Design
2 minutes ago, Transam said: Perhaps there is a vigorous/lengthy training course for F35's, whereas, Polish pilots can hop straight into F16's... Yes I guess that's true. But it would be such a sweet deal if Poland is able to…

Faz
This is the final warning! Further posts that infer facts and are not supported with a verifiable link to the source will be removed without further notice. Moderator.
vlad
This short video was filmed at the Polish border, this poor lad was crying walking with his little bag he was alone.
Guphz
On 3/5/2022 at 5:22 PM, Sparktrader said: Asshole NATO and asshole USA started this. Crazy lunatic asshole Putin escalated it into war. And now who dies? Ukrainian civilians, Ukrainian soldiers, and Russian kids that Putin sends to war. One has…
Guphz
On 3/6/2022 at 11:39 AM, butterfly said: the poor Ukrainian people have been sacrificed for the well being of NATO, the US and the cowardice of the EU27 well done Putin for exposing us for what we are, we created…