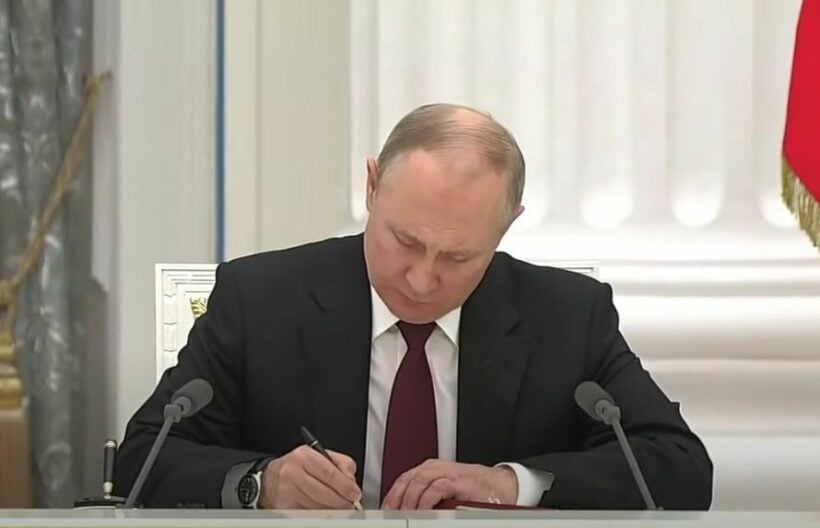 The move against Ukraine’s sovereignty puts the region one step closer to the brink of conflict, which the West has urgently tried to avoid in recent weeks through diplomatic talks and threats of sanctions.

After Putin ordered the defense ministry to send forces to “keep the peace,” tanks and other military equipment were seen rolling into the city of Donetsk, a separatist stronghold in Ukraine’s Donbass region.

Speaking with Reuters, an unnamed senior US official cautioned calling the current occupation a “further invasion,” saying Russia’s deployment of troops to breakaway regions does not constitute further invasion, and would therefore not result in the harshest sanctions. Rather, it could be a strategic next step in a broader military campaign, which could be launched at any moment.

Putin announced his decision in a televised address, in which he aired a long list of grievances against the West, claimed Ukraine integral to Russian history and declared eastern Ukraine ancient Russian lands. The separatists leaders of the rebel regions were seen in the Kremlin signing agreements of friendship and cooperation.

The Kremlin said Putin has earlier taken time to announce his decision to the heads of state in France and Germany via phone calls.

Ukrainian President Volodymyr Zelenskiy responded with an address to the nation on Tuesday, saying he would not conceded territory to Russia, which he said had wrecked peace talks.

Meanwhile, US President Biden signed an executive order banning all goods — if there are any — and halting all business activity in the region.

Anthony Blinked, US Secretary of State, explained the measures did not constitute sanctions, which the US is ready to impose if Russia launches an all out invasion of Ukraine.

“[The executive order] is designed to prevent Russia from profiting off of this blatant violation of international law.”

Russia is sure to feel the bite of new Western sanctions, as the US, France and Germany have all agreed to counteract the latest aggression with harsher Russian sanctions, and the UK to follow suit.

For its part, Russia has consistently denied it plans to attack its Eastern European neighbour, but it has instead threatened “military-technical” action if it doesn’t receive vast guarantees of security, including a promise from NATO that Ukraine will never join its ranks.

In his televised address, Putin appeared visibly angered as he recounted Russian history, and announced his decision to formally recognise the Ukraine’s breakaway regions, which had already been controlled by rebel and Russian troops in principle since his annexation of the Crimean Peninsula in 2014.

Alavan
3 hours ago, KRLMRX said: the problem is that modern Ukraine is just as corrupt, totalitarian as Russia. Ukraine has been selling its "desire for freedom" to the West for 20 years. But that is their righ, if they want…
Alavan
2 hours ago, Rookiescot said: The oligarchs are now losing money because of Putin. Many of them are very powerful individuals and indeed some are essentially professional criminals (mafia). They might decide Putin needs to go Seems the oligarchs lost…

KRLMRX
59 minutes ago, Alavan said: But that is their righ, if they want that, not that of Putin. You can just hope they will change and condone it. That is why Zelensky (from jewish descent, not a neo nazi) was…

Smithydog
Note from Moderators Members are reminded that Forum Guidelines require facts to be supported. In this time, when disinformation or "propaganda" is likely, Moderators are closely watching posts discussing the situation in Ukraine. When stating or inferring facts, please…
KomanderChicknNugget
11 hours ago, Poolie said: May be he's talking about who runs the gaffe. The corporations, etc. Ok got it. The population is diverse but the corporations are all Anglo-Saxons. Do you really believe this nonsense?

Alibaba and Tencent sites added to US ‘notorious markets’ list