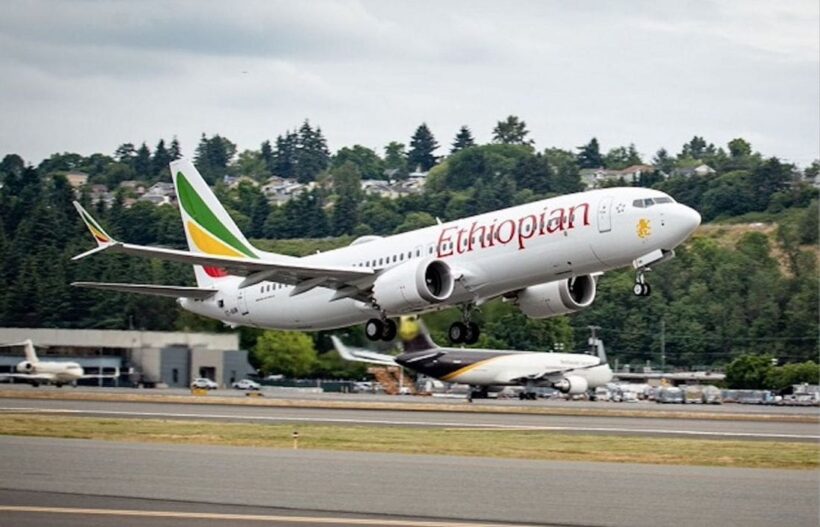 All 157 people on board the Ethiopian Airlines flight from Addis Ababa that crashed yesterday morning have died, the airline has confirmed.

The airline said in a statement… “We hereby confirm that our scheduled flight ET 302 from Addis Ababa to Nairobi was involved in accident today.”

The plane is reported to have been first flown by Ethiopian Airlines last November. On its website the airline only listed one 737 Max 800 in its fleet.

This becomes the second time in less than six months, an identical, brand new Boeing aircraft crashed just minutes into a flight – either a tragic co-incidence or a statistical concern for operators of the new Boeing 737 MAX 800 aircraft.

Yesterday’s Ethiopian Airlines tragedy follows the Lion Air flight that went down over the Java Sea off Jakarta in late October 2018, killing all 189 people on board.

The Thaiger report about that crash HERE.

At this stage there is already speculation as to what caused the latest disaster as the business of recovery of body parts and plane wreckage continues. And there is no evidence that the two incidents are linked.

But both flights took place on the new 737 MAX 800 aircraft, a new Boeing model that saw its first flight less than two years ago.

The new 737 models, whilst sharing the same ‘737’ name as the popular short haul jet launched in the 1960s, are a vastly different plane in technology, materials and efficiency, including all the latest avionics, warning systems and fuel-saving engines.

Mary Schiavo, a CNN aviation analyst and the former Inspector General of the U.S. Transportation Department, says that two crashes, both in the minutes following take off, and in a brand new plane, is “highly suspicious”.

“Here we have a brand-new aircraft that’s gone down twice in a year. That rings alarm bells in the aviation industry, because that just doesn’t happen,” she told CNN.

The Lion Air flight went down 13 minutes after take off, while yesterday’s Ethiopian Airlines flight crashed just 6 minutes into its flight.

It is also known at this stage that the Ethiopian Airlines did dip and then regain altitude before it crashed, just like the Lion Air flight.

“The similarities with the Lion Air incident are too great not to be a concern,” Schiavo said.

At the root of October’s Lion Air crash was a new safety system installed in the MAX 8 plane, known as the Maneuvering Characteristics Augmentation System, that automatically forces the plane ‘nose down’ if data suggests it is at risk.

In the Lion Air flight, the system was responding to faulty data (according to the flight data recorded and investigator reports) that suggested the nose was tilted at a higher angle than it was, indicating the plane was at risk of stalling.

For the Lion Air pilots it ended as futile tug-of-war with the plane’s automatic systems, trying to reverse a nosedive that should not be triggered so soon after takeoff. Boeing has argued strongly, and publicly, that pilots should have identified the system was in operation, and turned it off.

In the case of the Ethiopian Airlines flight it is likely we will get information from the flight recorders in a matter of days or weeks. That the crash occurred over land will make the retrieval of this vital information much easier. The two ‘black box’ recorders (which are actually orange) record all the flight data from systems around the aircraft, and the actual conversations and radio chatter in the cockpit.

Ethiopian Airlines has had a high safety record in the past whilst there have been industry concerns surrounding Lion Air for a long time.

If investigators are able uncover a similar cause of the two accidents the repercussions for Boeing, and other airlines flying the new Max 800 aircraft, could be dramatic.

CNN aviation analyst Schiavo says, “The MAX 8 could be grounded if a link is found, either by the company itself, or by governments, though the former is more likely to come first. The voluntary basis is always the better way to go, but it will be expensive for Boeing.”